The group of Sporades islands is located off Mount Pelion, in the northwestern Aegean Sea. It actually consists of four Greek islands (Skiathos, Skopelos, Alonissos, and Skyros) and a few uninhabited islets that form the Marine Park of the North Aegean Sea.

The most popular island of Sporades is Skiathos, famous for the lovely sandy beaches and the intense nightlife. Skopelos and Alonissos are less popular beaches, but they amaze visitors with the green landscape and the relaxing coves. Skiathos and Skopelos were also the islands where scenes for the Hollywood movie Mamma Mia (2008) were shot.

Skyros is the least famous island of the group, mostly due to its distance from the rest of Sporades and the sparse transportation. It is a beautiful place for relaxing, family vacations away from large crowds. According to mythology, Skyros was the island where king Theseus was assassinated and also where Achilles went to hide to avoid the Trojan War. Eventually, Ulysses and a few other Greeks found him and convinced him to participate in the expedition. 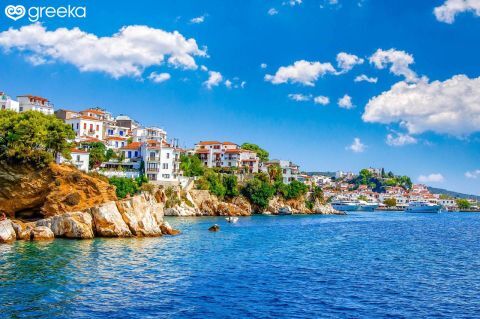