The Cyclades islands (/ˈsɪklədiːz/; Greek: Κυκλάδες [kikˈlaðes]) are the most popular group of Greek islands in the Aegean Sea. Its name "Cyclades" derives from the Greek word cyclos, which means "circle" as the islands form a circle around the sacred island of Delos, one of the most important religious centers of ancient times.

The natural landscape of the Cyclades is arid and wild. The beaches have crystal water and are covered with sand or pebbles. Geographically, the islands of the Cyclades are considered the peak of a submerged mountainous terrain, except for two volcanic islands, Santorini and Milos. The climate in Cyclades is generally mild and dry, temperatures are cool and northern winds known as "meltemia" blow in the summer, making the atmosphere chilly even during the hot summer days.

The most popular island of the Cyclades is Santorini, a volcanic island with quaint villages hanging on the edge of a submerged caldera. From every spot of the caldera, visitors can see the top of the volcano and enjoy the most romantic sunset views in the world. Due to its wild natural beauty and the fabulous sunset, Santorini is a very popular wedding and honeymoon destination.
The second top island of the Cyclades is Mykonos, famous for its traditional architecture and wild nightlife. Enjoy the sunset from the windmills on the hill above Chora, walk around the picturesque village of Mykonos Town (Chora) and Little Venice and swim in exotic beaches. At night, the heart of entertainment beats at the bars and clubs of Chora.
Paros and Naxos are also very popular islands of the Cyclades. In general, every island has something different yet charming to offer to visitors. Frequently connected by ferry or plane from Athens, Cyclades islands constitute the most typical destinations for holidays in Greece.

Why visit the Cyclades?

Cyclades is the most famous archipelago in Greece!

While there are around 220 islands and islets, not all of them are inhabited. Some islands like Santorini, Mykonos, Paros and Naxos are very popular while some others are also very beautiful but much calmer and a perfect alternative for a relaxing holiday. Discover our Cyclades Travel guide with 23 islands in the Cyclades listed by popularity.

When to visit the Cyclades?

The best period to visit the Cyclades is between June and September. The weather is great and the sea temperature is perfect for swimming. August is the hottest month and must be avoided if you want to hike.

The Cyclades islands are located in the Aegean sea, on the eastern side of Athens. The islands are easily accessible by ferry and some of them also by plane. Discover how to get to each island. 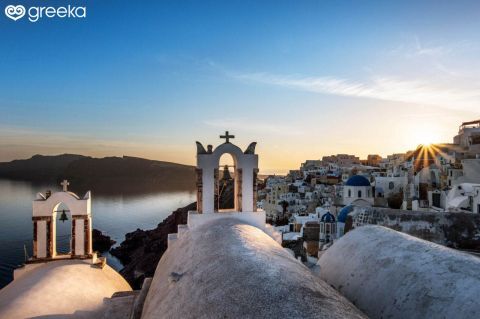