Information about the Villages of Cyclades islands, in Greece but also information about villages in many islands of the group: There is no doubt that in Cyclades islands visitors will find some of the most traditional and picturesque villages in the country. Clifftop settlements with a breathtaking view of the sea, captivating labyrinths and unspoiled villages built on the seaside are often the most popular attractions in these islands.

Beautiful Cyclades villages can be found in the most popular islands, like Mykonos, Santorini, and Paros distinguish for their local architecture, the historical churches, and the traditional atmosphere. Of high interest are the caldera villages in Santorini with the unique whitewashed houses constructed right on the edge of the cliff, romantic narrow alleys, and a view directly to the volcano. The traditional quarters of Mykonos are also special, particularly Little Venice, and the Venetian architecture of Naxos. Charming fishing Cycladic villages, such as the famous Naoussa in Paros, also attract many tourists.

In the least-known islands, villages in the Cyclades are even more traditional characterized by their authentic character and keeping the traditional ways. The quietest villages can be found in islands where tourism is nonexistent, like Anafi, Iraklia, Sikinos, and Kimolos: there, visitors can see the most authentic version of Cyclades villages, without the busy taverns, bars, and gift shops. Except for Naxos, which is the greenest island of Cyclades, the villages in the rest of the islands are surrounded by wild, rocky cliffs and little vegetation.

✔ DISCOVER THE MOST CHARMING VILLAGES!
Want to discover the Cyclades and its most charming villages, with ease and totally carefree? Take an organized island hopping tour!
Want to make your own island-hopping trip? Book your ferries online and view more services that can help you organize your trip.

Here are some of the best villages in the Cyclades islands: Oia and Fira in Santorini, Chora in Mykonos, Chora in Amorgos, Apiranthos in Naxos, and more. 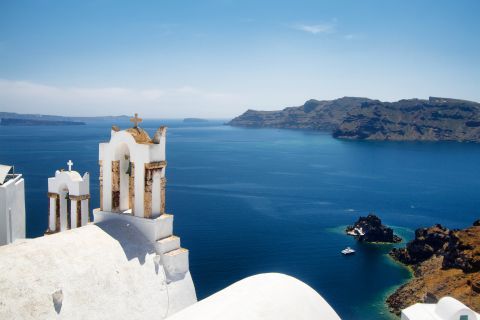 One of the most beautiful villages in Greece, Oia on Santorini island has been constructed right on top of the impressive volcanic caldera. With wonderful Cycladic architecture and a breathtaking view to the Aegean Sea, Oia is also famous for its romantic sunset. In fact, thousands of couples head to Oia every year to see this fantastic sunset. 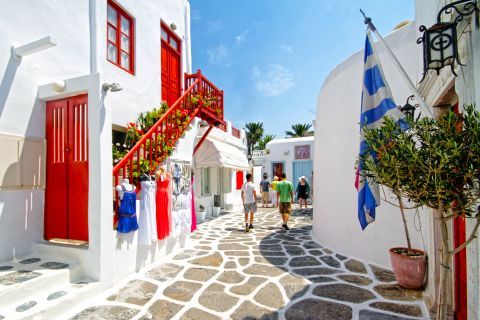 Mykonos Town (also called Chora) is among the most characteristic towns with Cycladic style. This is the capital of Mykonos island. Walk around this small town and cross paved paths lined up with white houses, tourist shops, lounge bars, and traditional taverns. The most beautiful spots of Mykonos Town is Little Venice and the hill with the windmills. From both these spots, visitors can enjoy a wonderful sunset. 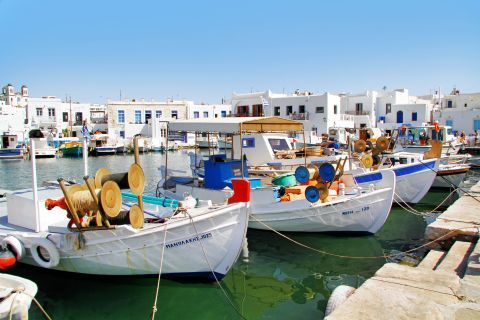 Located on the northern side of Paros, Naoussa is among the most picturesque Cycladic villages. With a combination of Medieval and Cyclades architecture, Naoussa is getting popular for its lovely port lined up with fish taverns and bars. In fact, Naoussa is among the best nightlife spots in Paros with lovely bars that do not close before the early hours. 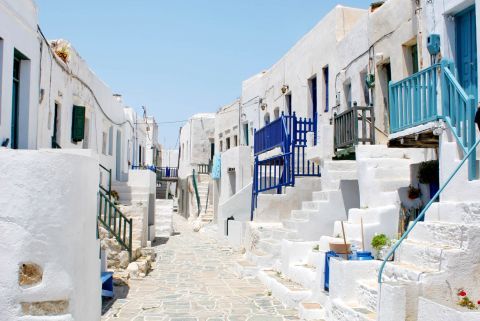 Chora village in Folegandros island charms visitors at first sight with the traditional architecture and the breathtaking view to the Aegean Sea. In fact, the oldest quarter of Chora called Kastro is a fantastic place to explore on foot. On top of Chora Folegandros is the lovely church of Panagia that can be reached through a narrow path up to the hilltop. 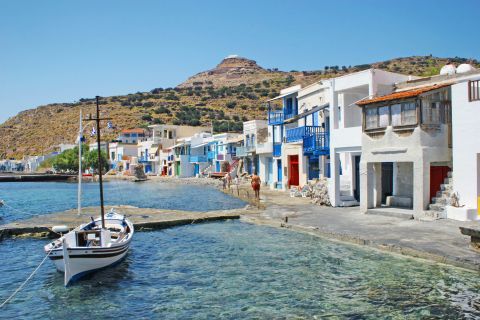 The special village type of Milos island is the nice fishing village with boat garages on the ground floor of the houses. The most famous of these fishing villages is Klima, lined up with white house walls and colorful (red, blue, yellow and green) doors and window shutters. Klima is especially beautiful in the evening, during sunset time. 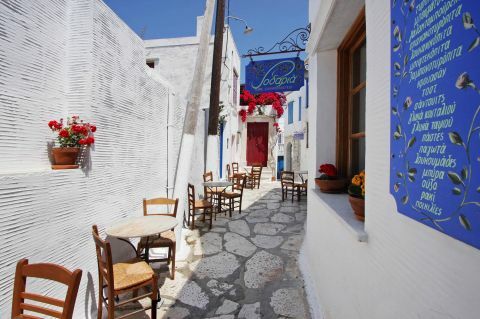 Pyrgos village is built in the heart of a verdant site, as one of the largest, most beautiful villages of Tinos and the entire Cyclades. The village charms with the numerous marble creations made by the local craftsmen. 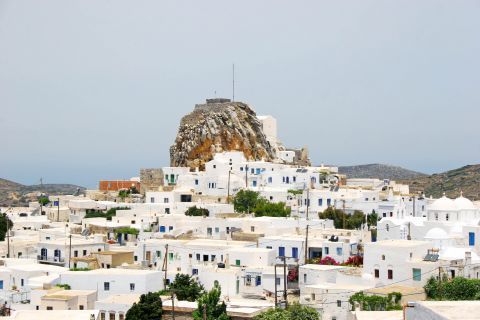 Constructed on the slopes of a rocky hill, Chora is the capital of Amorgos island. This is a wonderful village with tiny white houses, paved paths, and lovely churches. A large rock dominates above Chora village in Amorgos with a steep Venetian Castle on top, remaining of the Medieval times. In fact, the entire village has some signs from the Venetian times, such as elegant mansions. 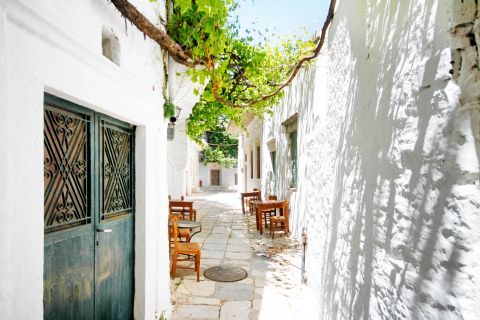 Located in the mountainside of Naxos island, Apiranthos is a beautiful village with traditional architecture and wild surroundings. The name of the village means plenty of flowers due to the beautiful nature around it. Apiranthos has four small but interesting museums in the central square with valuable exhibits. 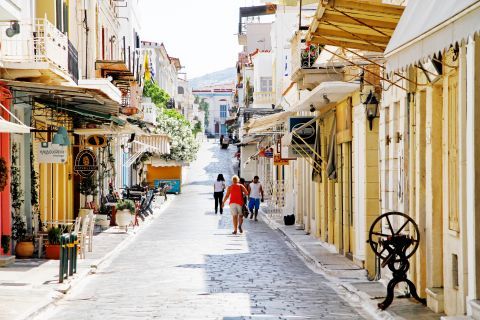 Chora in Andros island is among the most beautiful and elegant of the Cyclades villages. With impressive Venetian mansions next to small traditional houses, Andros Chora is a fantastic place to discover by foot. Do not miss the Goulandris Museum of Contemporary Art and the sea view from the square of the Unknown Sailor. 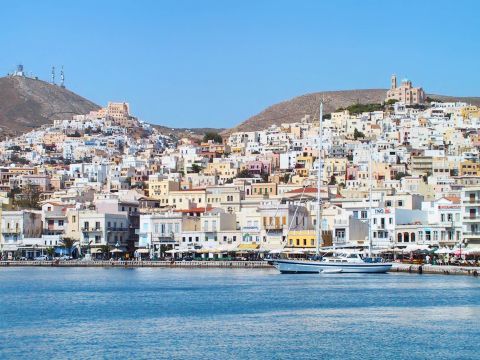 Ermoupolis, the capital of Syros island, is different than the other villages of the Cyclades. Only the quarter of Ano Syros has some Cycladic features, while the main town has more Venetian architecture due to the strong influence by the Venetians in Medieval times. In fact, Syros is a Greek place with the largest population of Catholics.

Explore the Villages on each island

Information about the villages on the islands of Cyclades: 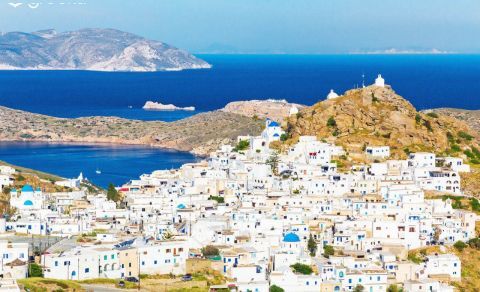 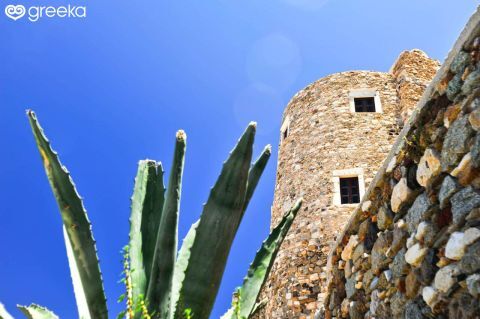 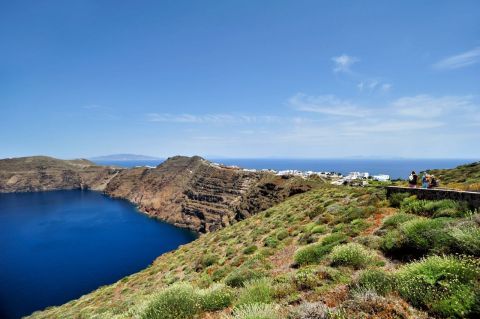 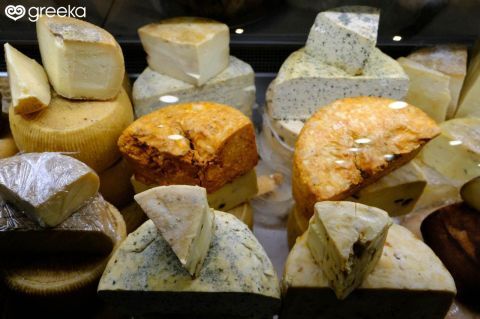