Mykonos, the second most popular island of the Cyclades and a worldwide summer holiday destination has one of the most prominent culinary scenes of Greece. Restaurants of different styles and cuisine co-exist on this small piece of land in the Aegean sea and serve the most delicious dishes a traveller would want to taste during his holiday. From broadly Mediterranean, Greek and local recipes to Asian, Italian and French dishes, one thing is for sure: every palate can be satisfied. Fine-dining restaurants with romantic views by the sea and traditional taverns hidden away on a whitewashed alley are the settings where you will have a dinner to remember for a while!

On a quick note: The best restaurants on Mykonos island that you should definitely not miss are Fokos tavern, M-eating, Bakalo, Nice n’ easy, To Maereio, Kastro’s, Blue Myth, Kalita and Nikolas tavern.
Click on "read more" to discover more information about Santorini restaurants: where to eat, what to order, why Mykonos is considered a gastronomic bliss along with extra information regarding dining establishments on the island.

✔ COOKING CLASSES IN MYKONOS
Are you a gastronomy lover? Don't miss the Cooking Classes! These classes are very popular, so you should register promptly!

We have hand-picked the best 43 restaurants in Santorini and marked our favorite ones with a ❤.

Mykonos is a cosmopolitan island primarily known for its vivid nightlife and beautiful beaches. Millions of people from around the world including Hollywood stars, celebrities and jetsetters annually travel to this small Cycladic island of the Aegean in order to experience its natural beauty along with the fantastic party scene. Mykonos is justifiably named as the Greek sister of Ibiza. The tourist growth of Mykonos could only be accommodated with the construction of designed hotels and fancy restaurants to establish a first class holiday destination.

On the island, a plethora of alternative restaurants can satisfy every palate, preference and budget. Travellers can easily spot local traditional taverns, fusion restaurants, refined dineries experimenting with Greek contemporary dishes, fine dining and international eateries co-existing in Chora, as well as closer to its magnificent beaches.

Moreover, being a well developed tourist island with its new port connecting it with numerous other islands as well as the Greek Capital gave Mykonos quite a few advantages. One of them is having daily and easy access to fresh and premium quality ingredients from every part of Greece such as seafood, meat, vegetables, wine and more. Apart from the tasteful products grown locally, Mykonos imports the finest fish, fruits and vegetables from nearby Cycladic islands that remain less touristy as well as from Athens.

These products of exceptional quality end up in the kitchens of talented chefs executing the delicious recipes served at the island’s restaurants. During your stay in Mykonos expect to find Greek traditional and modern cuisine at its finest while savouring Italian, French, Japanese, Indian and Peruvian dishes as well. The plethora of exquisite restaurants on the island guarantees a memorable culinary experience.

Although fine-dining and International restaurants have grown substantially in popularity and claimed their place on the island, it is at the local taverns where travellers will savor the truly authentic Mykonian and Greek cuisine. A warm, friendly and unpretentious setting with a menu that consists of decades old traditional dishes will be experienced there. Among the local delicacies, one should definitely try “Kopanisti”, a soft yet spicy cheese appetizer, “louza” a dried aromatic pork ham and the homemade “loukaniko” sausage.

Furthermore, our hand-picked selection of restaurants covers the best of the Mykonian culinary spectrum. As happens with every popular destination, tourist traps do exist on the island, located mainly near the most busy and famous attractions, thus excluded from our recommendation charts. Lastly, due to the great number of tourists during high season, a table reservation a few weeks in advance is strongly recommended.

Best restaurants in Mykonos by type

General info about restaurants in Mykonos

Lunch time: 12:00 -17:00 / Dinner time: 18:00 - 24:00.
Note that in Greece, in general and especially during the summer season where days are longer, people dine later than the central and northern European meal times. Lunch is usually served around 14:00 and dinner at around 21:00, but that is not absolute. Even if you arrive as late as 23:00, most establishments still operate and will gladly serve you.

Depending on the location and the popularity of the restaurant, it is highly advised to book your table at least a few weeks in advance, in order to enjoy a comfortable and swift mealtime.
The top-rated restaurants in Mykonos require a reservation at least 3 days in advance for a dinner, whereas for lunch it is much easier to find a table, as they are not as popular.
In any case, if you have already spotted some restaurants or taverns that you would like to visit, we highly recommend that you proceed with a reservation.
Make an online reservation and look forward to your special and delicious rendezvous in Mykonos!

Tipping in Greece is not strictly regulated by percentage. An average tip can begin from 3 - 6 € for small orders, but it is polite for large orders to go with the 10% courtesy. Not leaving a tip at all is considered impolite and taken as a dissatisfaction with the establishment’s service and meals.

Restaurants in Mykonos serve bottled still water by default. If you prefer sparkling water you can always ask for it.

Every restaurant on the island, even small local taverns, provide their menu in English. Some might have a menu translated in other languages as well (French, German, Italian, Chinese, or Russian). Also, all the personnel in restaurants speak English and communication is not considered a problem.

As you notice on the menus, both traditional and modern restaurants in Mykonos present their dishes by category: salads, appetizers, main dishes, fish, meat etc. If you plan on having a group meal of more than 2 people, you can request a mixture of different main dishes and appetizers for the middle of the table and share them, instead of ordering one main dish per person. This is called mezes and it is very common in Greece; you will see many Greeks preferring a group meze along with their drinks. With Greek cuisine’s rich variety of delicious appetizers, it is only natural that you would want to try out as many as possible. 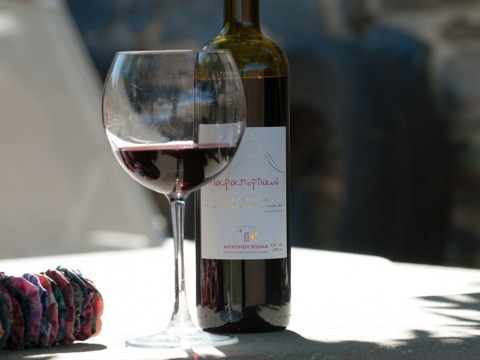 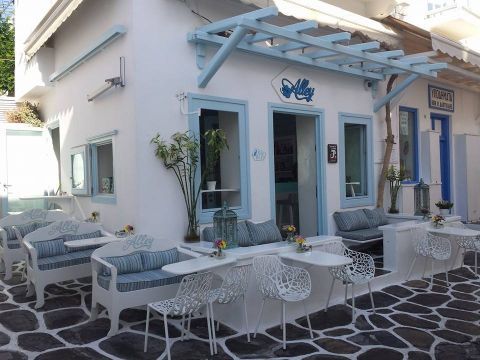 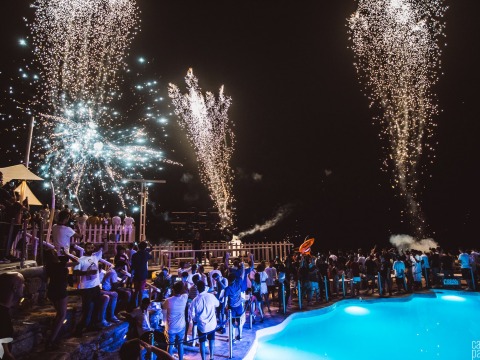 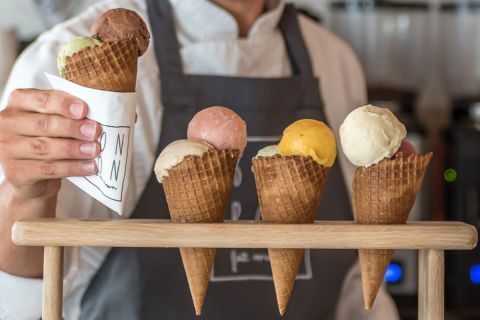