Situated near the two major archeological sites of Crete, Knossos Palace and Phaistos Palace, Heraklion is the perfect base for your exploration! The region itself is lovely, with stunning beaches to discover and a lively town, full of hidden gems from the Venetian period.

Find out everything about your holidays in Heraklion on our guide! Discover the best things to do, fantastic beaches, top hotels, and restaurants, as well as a wide selection of breathtaking photos!

You can reach Heraklion easily by plane from Athens airport & abroad, or by ferry from Athens.

How to Get there? 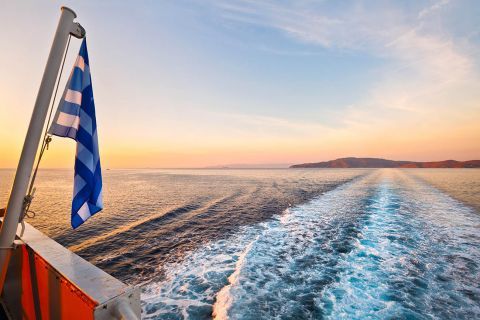 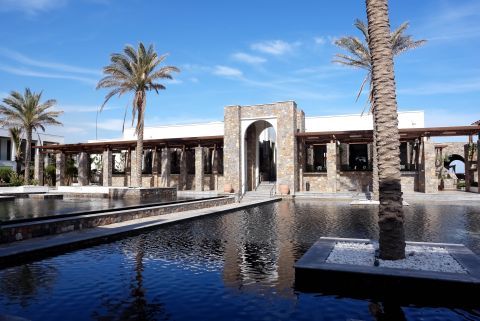 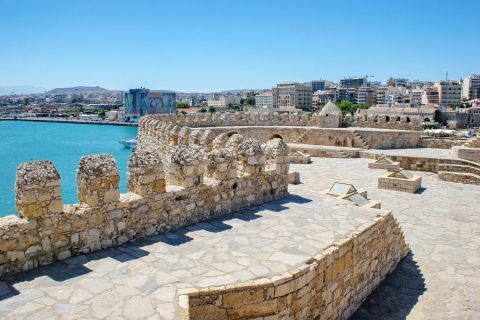 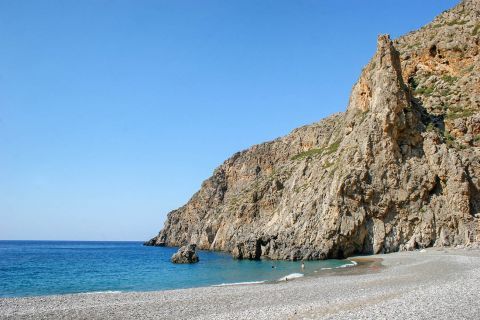 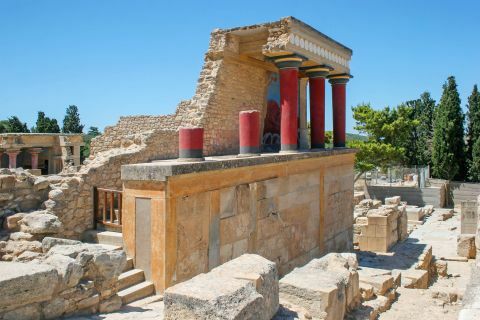 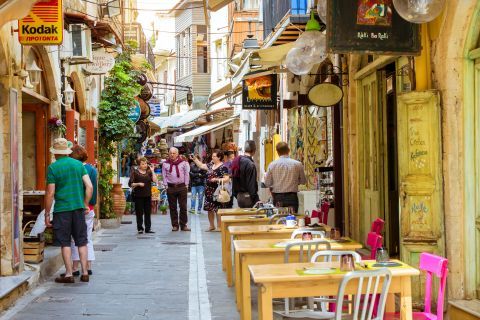 We help thousands of people every year to plan beautiful and trouble-free holidays in Greece. From hotels and from car rentals to ferry tickets, we provide all the essential travel services, to make your trip to Greece the most epic and smooth one.
Our services are rated . Our guide and services won the Silver Award (2020) of the annual Tourism Awards in Greece. Read reviews about our services.

Heraklion is the most popular region of Crete and is located on the eastern side of the island, between Rethymno and Lassithi. Its beautiful capital, Heraklion Town, is one of the busiest cities in Crete.
In the Heraklion region, you will find two of the most important Crete monuments: Knossos Palace & Phaistos Palace.
Being over 20,000 square meters big, the Minoan Palace of Knossos is the largest of all Minoan palatial structures. The remains of colorful murals, imposing red columns and the glorious throne room will make you feel transported into the Minoan Era.
The Minoan Palace of Phaistos is the second most important Minoan site, after Knossos. It is located on the east side of Kastri hill, boasting a beautiful natural setting and attracts history enthusiasts from all over the world!

Even though it has an often crowded city center, the main Town keeps its fairytale vibe. Strolling around the town, you will come across Koules fortress, at the Venetian port, Turkish and Venetian fountains, Venetian buildings, the Venetian Loggia and museums, such as the Archaeological Museum, the Historical Museum and the Museum of Natural History.

If you are not a big fan of sightseeing, though, you should head to the beautiful beaches! The northern and southern coasts of the region are fringed with some amazing beaches, such as the former hippies paradise, Matala beach, Agia Pelagia and Malia.
For those who want to spend their holidays in Crete by the beach, there are many hotels close to these beaches!

Explore Heraklion Greece through the lens of the talented members on Greeka community.
Share your experience with us or tag us #greekacom on your favorite social media.

Both luxurious and budget hotels are available for your accommodation in the region of Heraklion. In areas located near the sea, such as Analipsi, Agia Pelagia and Malia you will mostly discover big resorts with swimming pools that offer suites, bungalows, villas and other modern and stylish units. Smaller but also excellent hotels can be found in Heraklion Town and Hersonissos.
Some of the most popular hotels are Cretan Malia Park, Agapi Beach & High Beach.

HOW TO GET TO HERAKLION?

A popular way to reach Heraklion is by ferry from the port of Piraeus, in Athens. Heraklion can also be reached by plane (International airport).
Book your ferry tickets with us!

Discover the different ways to get to Heraklion:

Discover the highlights of Heraklion! From sightseeing to activities and from tours to restaurants, we give you the best recommendations for the ultimate holiday experience! You can also view the best things to do.