Archaeological Sites in Greece & the islands

This section proposes a brief description of the most interesting archaeological sites of Greece and the Greek Islands.

Discover the most famous sites of Ancient Greece: Archaeological sites like the Acropolis of Athens, Sanctuary of Delphi, Ancient Olympia, Delos island, Palace of Knossos in Crete, Ancient Epidaurus and Mycenae.

Note that visitors will find ancient sites in every part of Greece and in many Greek islands. 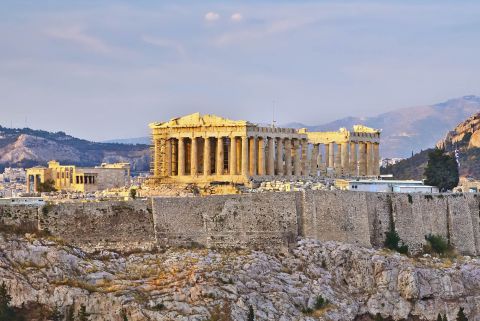 The Acropolis of Athens is the main and most famous archaeological site in Greece. It is also called the Sacred Rock, stands on the highest point of Athens. It is considered the most important heritage of the Classical period and also as Europe's most important ancient monument. The Parthenon Temple is the main building on the Acropolis and constitutes an architectural splendor of ancient times.
The Acropolis stands proudly over the modern and busy city of Athens and it keeps reminding us that Athens was the cradle of a great civilization. Although temples were constructed there since the Archaic times, the Acropolis as we know it today was an idea of Pericles, the famous statesman of the Classical Era.
Made of fine Pentelian marble, the Acropolis and its buildings were constructed in the 5th century BC and it cost a huge amount of money for those times. The most famous buildings of the Acropolis are the Parthenon, the Erechtheion, the Temple of Athena Nike and the Propylaea. 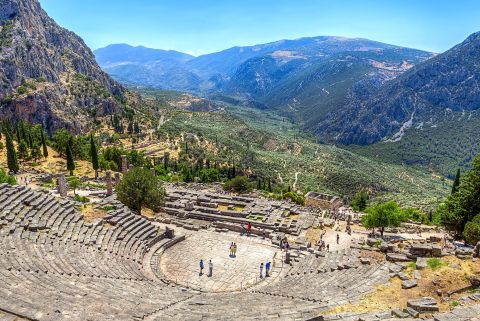 The site of Delphi is one of the most important archaeological sites in Greece. It was discovered in 1893 by the French School of Archaeology. This was the most important oracle of ancient Greece. During the Mycenaean Period, the female deity of Earth was worshipped in the small settlement of Delphi. The development of the sanctuary and Oracle started at the beginning of the 8th century B.C with the establishment of the cult of Apollo.
Gradually, the sanctuary continued to work autonomously and enlarge its influence on religious and political orders. The sanctuary was enlarged and decorated with beautiful buildings, statues and other kind of offerings. People from all over the Mediterranean would come to the oracle of Delphi to ask for advice from the priestess Pythia. Although many other oracles developed in Greece, this was considered the most accurate of all.
The most important monuments excavated in Delphi are the Temple of Apollo, the Treasury of the Athenians, the Altar, the Stoa of the Athenians, the Theatre, the Stadium, the Tholos, and the Gymnasium. Next, to the sanctuary, there is an interesting museum.

Book a tour to Delphi 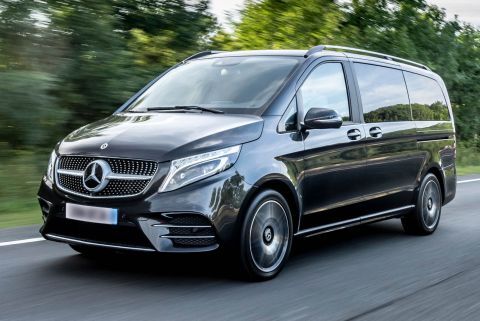 Organize a day trip to the most important ancient sites of Greece from Athens with a private guided tour in a luxury minivan! 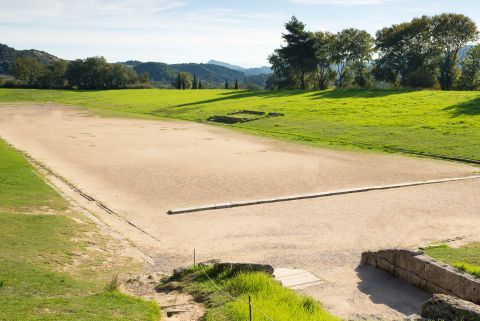 Ancient Olympia is an archaeological site situated in an area of great natural beauty in Peloponnese. It is considered one of the most important sanctuaries of the antiquity and it was dedicated to the father of all gods, Zeus. In fact, two great temples of Zeus and Hera were constructed there in ancient times.
Olympia was also the place where the ancient Olympic Games were first held n the 7th century B.C. The Games were organized to honor Zeus and, according to the myth, they were founded either by Pelops, king of Peloponnese or by Hercules. These were the most important sports competitions in ancient times and even wars stopped at their duration. The winners were awarded a branch of olive oil tree and they were welcomed as heroes in their homelands.
The site was excavated by French archaeologists in 1829 and some of the findings were transferred to the Louvre Museum in Paris. The most important monuments of the site are the temples of Zeus and Hera, the Stadium, the workshop of sculptor Pheidias, the Palaestra and the Gymnasium. Next, to the site, there is an impressive museum with findings from the area.

Book a Tour to Olympia 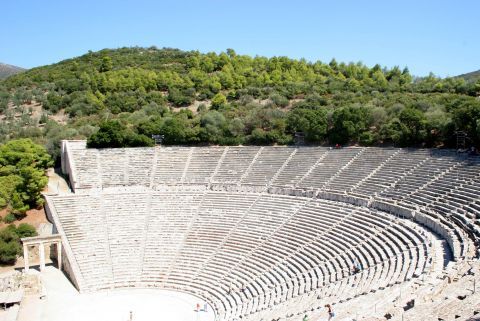 Located on the eastern side of Peloponnese, Epidaurus developed as a religious center and more particularly as a sanctuary of Asclepius, the healing god. In fact, according to the myth, Epidaurus was the birthplace of god Asclepius and this is why an important healing center was established there, famous all over the Mediterranean Sea. It was believed that the treatment was coming directly from the god. The patients would sleep in a large room and at night the god would come to their dream and indicate the necessary therapy.

In order to honor god Asclepius, large festivities would take place in the Ancient Theatre of Epidaurus as well as athletic competitions in the Ancient Stadium. The ancient theatre that survives today was constructed in the 4th century BC. It is large, made of marble and stone and famous for its amazing acoustics. In summer, performances of ancient Greek drama are presented there as part of the Greek Festival.

Book a Tour to Epidaurus 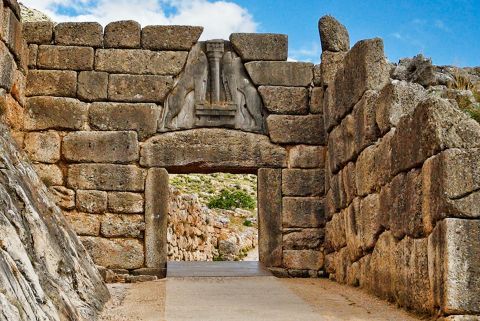 The site of Mycenae is considered as one of the oldest ancient sites in Greece and witnesses the development of the Mycenaean civilization. Mycenae was the legendary home of Agamemnon, ruler of the Greeks during the Trojan War. The Mycenaean civilization took its name after the discovery of the site of Mycenae. The Mycenaean civilization followed the Minoans. Their society, as proved by the excavations, was formed by an elite group. Their citadels were fortified with what we call the Massive Cyclopean walls. They were named like this because people thought that only Cyclopes could have lifted such huge stones to compose them. The society of the Mycenaeans was based on military force. Generally, this era doesn't have much to show in cultural issues, but it stressed mostly on urban planning and military invasions. The most characteristic spot of the site is the Lion Gate. Particularly interesting is also the museum.

Book a Tour to Mycenae 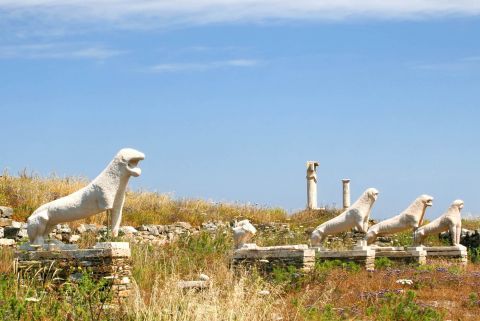 Delos, included in the World Heritage Monuments protected by the UNESCO, is a small islet situated a few miles from the famous island of Mykonos, in the center of the Cyclades. Delos is considered as one of the most important ancient sites and Pan-Hellenic sanctuaries of Greece. According to the Greek mythology, Delos was the birthplace of Apollo, the god of light and may be of Artemis, the twin sister of Apollo, goddess of hunting.
Delos was a sacred place in ancient times. It worked both as a religious and trade center. The excavations on Delos started in 1873 by the French School of Archaeology. The most important monuments of the site are the Agora, the Temple of Apollo, the Terrace of the Lions and the ancient theatre, which is being renovated currently to host theatre performances. On Delos, there is a small museum with findings from the island.
To go to Delos, you take the tour boat from Mykonos. The island is not inhabited but it is an open archaeological place.

Book a Tour to Delos 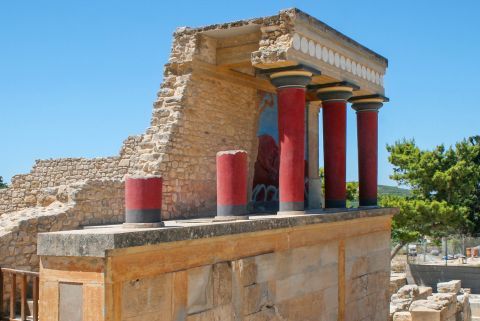 Knossos is the most important ancient site and best-preserved palace of the Minoan Civilization, that flourished in Greece from 2,700 to 1,450 BC. Knossos, located near modern Heraklion in Crete island, was the seat of the legendary King Minos and it is also a place connected to many legends such as the Labyrinth with the Minotaur and the story of Daedalus and Icarus.
At about 2,000 BC, the Minoans were characterized by a flourishing commercial, political, social and cultural system, as well as by the construction of impressive palaces, such as Knossos, Lato, Zakros, Phaestos, and many others.
The Minoans also developed for the first time a trade network with the rest of the Aegean and even established colonies, like Akrotiri in Santorini. From the lack of defensive walls, we can assume that the Minoans had peaceful relations with their neighbors. Also, their facilities and urban planning were surprisingly developed for that era.
The Minoan Palace of Knossos was discovered in 1878 by archaeologist Minos Kalokairinos and its restoration started in 1900. The most important monuments of the site are the palace of Knossos, the little palace, the Royal Villa and the house of the frescoes.

Book your tickets to Knossos 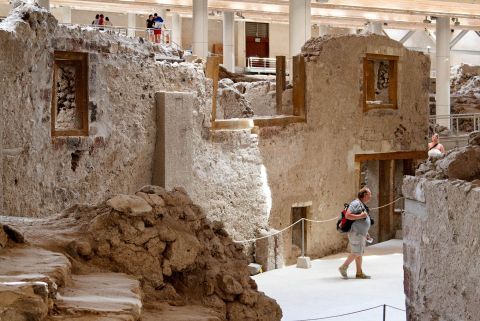 The Minoan Town of Akrotiri is located on the southern side of Santorini island and it is the second best-preserved site from the Minoan times, after Knossos. Due to trade, Akrotiri was a very developed town in the antiquity. The works also revealed a town with two-storey houses, public buildings, storehouses, even a sewerage system. As the town was found covered with volcanic ashes, it is believed that the inhabitants abandoned when the volcano of Santorini erupted about 1,500 BC.

Book a Tour of Akrotiri 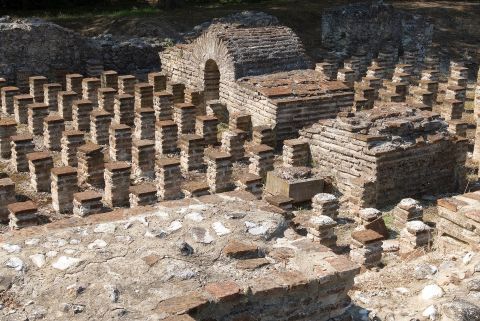 The Sanctuary of Dion was dedicated to god Zeus (Dias in Greek). As it is located on the grounds of Mount Olympus, it was considered the closest sanctuary to the Greek gods. From the very ancient times, there was an altar on the site to honor the Olympian Gods, but Dion largely developed during the Macedonian times. In fact, Alexander the Great made sacrifices to the gods there, asking them to favor his expedition to Asia. The site also developed in Roman times, as visitors can see remains of a Roman villa and mosaics. 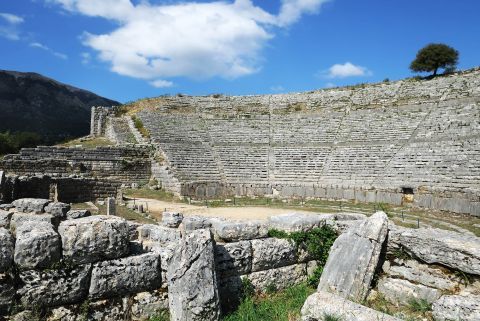 The ancient site of Dodona is located on the northwestern side of Greece, in the region of Epirus. This was the second most famous oracle in Greece, after the Oracle of Delphi. Originally the oracle was devoted to a Mother Goddess, which was either Rhea or Gaia. However, in historical times, the altar was dedicated to god Zeus. Dodona remained an important religious sanctuary until the rise of Christianity in the Late Roman Times. The most important sight there is the Ancient Theatre of Dodona.

Book your holiday with Greeka