Find out everything about your trip in Delphi on our travel guide! Delphi is one of the most important and interesting archaeological sites in Greece. Sitting on the slopes of Mount Parnassus, Delphi boasts an amazing natural landscape that highlights the historical significance of the place.

Delphi is famous for one thing in particular: it is home to the world-famous oracle of Delphi. This oracle was renowned in Ancient Greece, as pilgrims from all over the Mediterranean would visit it to receive the prophecies of the ancient Greek god Apollo. The prophecies were delivered by Apollo through the words of Pythia, the high-priestess of his temple.

According to the myth, which the scientists have also confirmed, Delphi is the navel of the Earth, meaning it is the central point(!) of planet Earth. As time went on, apart from a religious sanctuary, Delphi Greece also became the base of a political and military association. Today, many travelers flock to Delphi to explore the glorious Oracle of Delphi and be transported back to ancient times!

Are you ready to discover the mythical magic of Delphi? Find out how to get there and some amazing photos!! 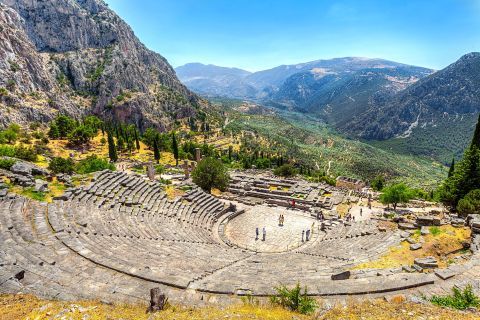 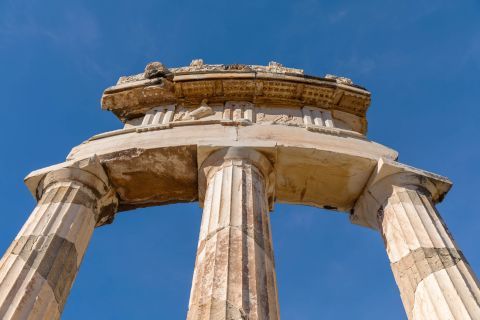 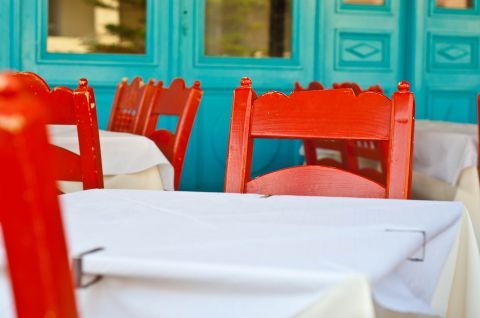 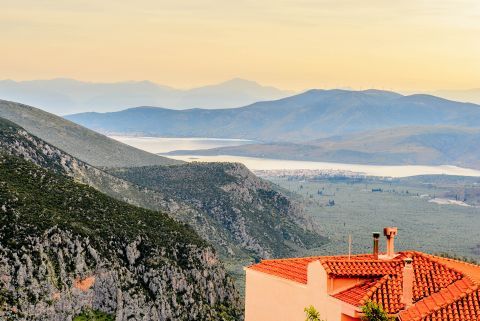 Delphi Greece has long been a popular destination among locals, mainly thanks to its close distance to Athens. But not only because of this… Delphi is one of the most popular and interesting archaeological sites in Greece. Its fame can be traced back to the ancient times when the glorious sanctuary of the ancient Greek god Apollo was built there. Immediately upon arriving in Delphi, you’ll be seduced by its mythical charm!

The sanctuary of Apollo also served as an oracle, where pilgrims from all over the Mediterranean would go to receive god's prophecy. Apollo would deliver his prophecies through the words of Pythia, the high-priestess of the temple.

The temple of Delphi is surrounded by treasury buildings which contained the offerings of the city-states to the oracle and by verdant mountains, which highlight its beauty.

During ancient times athletic competitions were organized every four years in honor of the god Apollo. The Pythian Games, as they were called, would take place at the stadium on the highest spot of the archaeological site. To get ready for the Games, the athletes would train at the Gymnasium, a gym on the southern side of the site. It’s worth a visit!

Other places you must visit inside the area of the Temple of Delphi are the Ancient Theater, which is currently under restoration, and the Archaeological Museum, which hosts valuable exhibits from excavations carried out in Delphi.

Next to the temple sits the beautiful Delphi village. There, you’ll find many Delphi hotels, restaurants and all the amenities needed for a relaxing stay. Having Delphi as your base, you can set off to explore nearby towns, such as Arachova, Itea, Galaxidi and other towns of central Greece.

If you want to introduce yourself to the history of ancient Greece, then Delphi is one of the best places to visit!

Explore Delphi Greece through the lens of the talented members on Greeka community.
Share your experience with us or tag us #greekacom on your favorite social media.

Discover the best things to do in Delphi! From Delphi sightseeing to activities, we give you the best recommendations for the ultimate Delphi holidays experience!

OUR TRAVEL SERVICES IN DELPHI

Explore our travel services & make the most out of your holidays in Delphi!