The beautiful Kythnos island, belonging to the Cyclades chain of islands, is a popular tourist destination, mainly because of the wide variety of activities it offers the visitors. Believed to have been named after the leader of the Dryopes and the first inhabitant of the island, Kythno, the island has seen its share of civilizations inhabiting it.

The Dryopes are believed to be the earliest civilizations to have settled on Kythnos, with ruins of Cyclopean walls and temples having been found. Herodotus claimed that the Dryopes migrated to Kythnos around the 13th century B.C.

The Dryopes were followed by the Ionians, after which the island participated in the Persian Wars and came under the Athenian Alliance. The Romans then gained control of the island, followed by the Byzantines. Conquered by Marko Sanoudo under the Venetian rule, the island was renamed Thermia, for its hot springs. After this period control was transferred to the Castelli family, followed by the Gozadini family.

Although it was frequented raid by pirates, the island still remained under family rule until 1827, when the island was renamed Kythnos and took part in the war against the Turks. After being turned into a place of exile for rebels, under the rule of King Otto, 1862 saw an attack on the island by rebels from Syros. This led to further oppression of the rebels and the death of many brave men.

Today the island provides many attractions to its visitors, while it still maintains its Greek culture. Agriculture and fishing are still the primary occupations, while tourism is also a major contributor to its economy. Moreover, the Cycladic architecture characterizes Kythnos with whitewashed houses with wooden balconies full of flowers and narrow pebbled streets.

Merichas is the main harbor of the island and provides visitors with every imaginable comfort, from numerous taverns, restaurants, hotels, apartments, bars, and cafes. The beaches are also beautiful, long stretches of sand, sapphire water, ideal for swimming or just for a day getting the perfect Greek tan. The sunset at Kavos Marko is not to be missed while on Kythnos.

The island also offers many historical sights such as the Katafiki cave, the monastery of Panagia Kanala or the Castle of Orias. Providing a truly wonderful experience for all visitors, trekking and diving are the major activities available on the island.

Kythnos is also the island where the first Aeolic Park of the country was created, on a hill above Chora. Getting to Kythnos is equally easy, by boat from Piraeus. Also connected with the other Cycladic islands through ferry service, Kythnos is easy to get to and you are guaranteed a fun and memorable vacation on Kythnos. 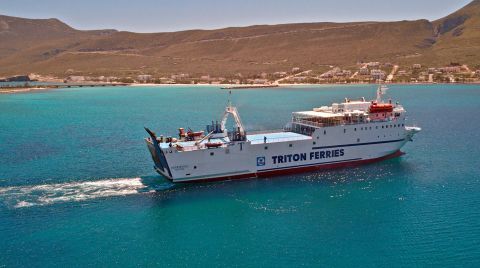