Around 36 km north of Argostoli, the capital city of Kefalonia, lies the tiny yet enhancing village of Assos, a hidden, artistically beautiful place that will provide you with a very relaxing experience and is worth visiting!
This small village is one of the must-sees due to its harmonic mixture of picturesque elements.
It's located at the hill of the small Erissos peninsula. Although its size is tiny and its population doesn't surpass 100 in number, it's a place that carries great historical significance, due to its strategic location.

Its name comes from the doric version of the Greek word island Nisos, modified to Nasos in the doric dialect. It's built above a narrow 50-meter-wide isthmus and the bay north of the isthmus functions as the port of the village. What makes its scenery unique, is its painting-like aesthetic with the beautiful architecture of the colorful pastel houses, juxtaposed with a clear view of the turquoise Ionian sea.

If you combine that element, with the lush vegetation and the tranquil beaches, you can imagine why it's a place renowned for its beauty.
The sunsets are just breathtaking and serene.

Its main historical attraction is the Assos Castle, built by the Venetians during the 13th to 18th century, who ruled over the Eptanisa islands.
The Eptanisa islands are the administrative region that Kefalonia belongs to, and consist of seven islands, most of them located in the Ionian Sea. The Venetians occupied them during this time period we call Enetocracy, and influenced the islanders heavily in the cultural, economical, and social aspects of their lives. 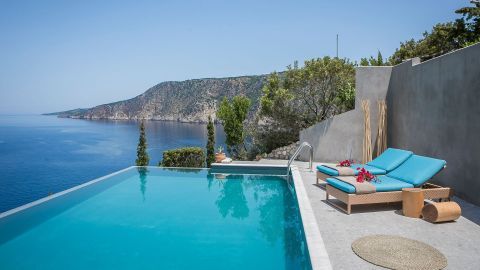 With a location that ensures a breathtaking view of the Sea, the building complex of Braunis Horio Villas can be found in Assos. All the villas have been designed to offer a luxurious stay, with style and all comforts. They are fully equipped and elegantly decorated, and they also come with private ...

There are 2 beaches at the coastline of Assos, which offer an incredible, almost tropical, experience with their blue crystal-clear waters.
This scenery, in combination with the view of the surrounding forest area, in a deep green color, is a feast for the eyes. Both of them have pebbles, a great view of the bay, and serene, calm waters that will make you not want to get out of the sea! The calmness and clarity of the waters make them great places for snorkeling.

At the larger beach, there are a few umbrellas and sunbeds to rent. The second, smaller beach, does not have these amenities, however, it attracts fewer people, so if you want your own idyllic private experience, make sure to visit it, and stay until sunset for one of the most romantic experiences of your life!

If you want to discover the beaches nearby, you should visit Myrtos beach, which lies at a distance of 11.5kms from Assos, and is considered the most beautiful beach in Greece! It has sunbeds, umbrellas, a canteen, and there is also a lifeguard.

Another option for your sea activities is the beaches around Fiskardo, the village in the northernmost part of Kefalonia and very close to Assos.

Although it's a small village, and the options are not limitless, there are a few great places to have a delicious and quality meal.

The most famous one on the island is Platanos restaurant, which offers a lot of traditional homemade options, with many vegetarian options as well.
Another great option, as well, is the Nefeli-Anait restaurant, with great seafood dishes.

If you prefer a street food culinary option, the 3 Wise Monkeys kiosk is the place to go! It has many healthy and good-quality options. There you can choose from an array of delicious options, including tasty smoothies, cocktails, tacos, burgers and so much more!

If, however, you want to enjoy your cocktails in the midst of beautiful colors, Hellenic Bistro is the place we absolutely recommend. It is a sunset bar, with friendly staff and a variety of incredibly tasty dishes of local cuisine.

Brief history of the village

Assos became the administrative capital of North Kefalonia in 1593. Many Souliotes, fighters of the Greek War of Independence, from the resisting town of Souli, were relocated by the Great Britain rulers at Assos village, after their surrender in 1811.

To provide some historical context, from 1815 to 1864, Great Britain had possession of all the Eptanisa islands and used them as a settlement, appointing them with the name of "United States of Ionian Islands".

When the great earthquakes of 1953 destroyed Assos, the French, who had in the past conquered the Eptanisa islands in 1797, helped the islanders to rebuild the entire village. In return, the grateful inhabitants named the main square of the village, Panagia ton Parision (Notre Dame), to honor them.

What to See and Do

The Assos Castle is a proclaimed European Heritage Site and one of the two remaining fortresses in Kefalonia which are indicative of Venetian Military Architecture and one of the largest castles in Greece. The Venetians constructed it in the 16th century, on top of 4 bastions, with 2 more being added later. Its main purpose was to protect the island from invasions which were taking place frequently by the pirates and the Ottomans. It became the capital of Northern Kefalonia due to its strategic location. When the Venetians captured Lefkada from the Ottomans, it lost much of its usability as a defensive building, and Argostoli became the capital instead.

From 1585 until the fall of the Venetian Democracy, in 1707, it was used as the residence of the Venetian High Commissioner (Provedditore Generalle da Mar/ Provleptis). Originally it housed around 200 homes and 64 buildings.

After 1920, it was used as a prison. It was notoriously inescapable since the fortress lies 155 meters above the sea, surrounded by very high and steep cliffs. In the beginning, it functioned as a rural prison, inhabited by small-scale offenders and later by serious offenders with long sentences. After World War II, the inmates were political prisoners.

Fortunately, its outside walls escaped the devastating fate of most of the buildings in Kefalonia that were destroyed in the great earthquakes of 1953.

Its residents, however, abandoned it and the prison closed. It is uninhabited since 1963, when the few rural families (named Kastrinoi - people of the castle) who had remained living there, left the premises.

Its outside walls span across 2.000kms. Its shape is rectangular, a classical example of Venetian and military architecture. It has 4 corners with bastions named: Saint Markos, Saint John of the Count, Respuna, and Mora. There is a fifth one, between Respuna and Mora, named Santa Maria, and a sixth one, north of Mora, named Kabusa.

Through the ruins, you can see the catholic abandoned church of Saint Markos, the abandoned House of the High Commissioner, and lastly, the repaired buildings of the rural prisons. Its main attraction is the Lion of Saint Mark, which lies at the entrance of the fortress. The orthodox church of Prophet Elias was built in 1800, on top of the ruins of another church. Furthermore, 6 or 7 Venetian canons are visible North and West of the walls.

The entrance is free. It is open for visiting every day, from 9 to 5, and on Saturday, from 9 to 4. It is accessible through its 2 gates. You can reach the east gate through a 2km paved sidewalk. The south gate (Portello), is at the end of a 800 meters long path and is a great option if you want to walk among the olive trees which grow there. You have to keep in mind though, since there are no facilities in the wider area, to bring with you a hat and definitely water, to protect yourself from the heat.

In addition, make sure to bring your camera or a pair of binoculars, to be able to capture your journey through history and enjoy the most breathtaking view!

One of the must-dos in Assos, if you are a lover of the less crowded, more secluded beaches, is to take advantage of the boat rental services provided by the Conteco Boat Service. It can be found at the pier of Assos and offers you the opportunity to explore all the surrounding, small, private beaches of the island, accessible only by sea.

If your budget allows it, you can use the luxury version of the boat, making your sailing trip an unforgettable experience. If you are on a tight budget though, you can also enjoy the picturesque beaches with the boats of the fleet.
Furthermore, you can have your private tour with your own experienced captain or be transferred to and back to the beach of your choice!

In brief, Assos is a picturesque village full of pastel-colored houses with a tranquil atmosphere. It surely should be on the bucket list of anyone who wants to visit Kefalonia. If you’re looking for a place to switch off, Assos is the perfect destination for you!

How to get to Assos

How to get to Assos

Private transfers: We recommend using an online pre-booked transfer service, which provides transfer by taxi, minibus or private VIP car and arranging a pickup directly from the airport, port or your hotel. Alternatively, there’s the option of arranging a pickup by a local driver directly at the following numbers: 0030 694 5306 145, 0030 694 5118 866, 0030 697 7193 569 or book your taxi online.

Car rental: Τhere’s the option of renting a car with as little as 11 euros per day and pick it up directly from the airport, port or your hotel. Using a car rental allows visitors to discover Assos and many other places of interest at their own pace. 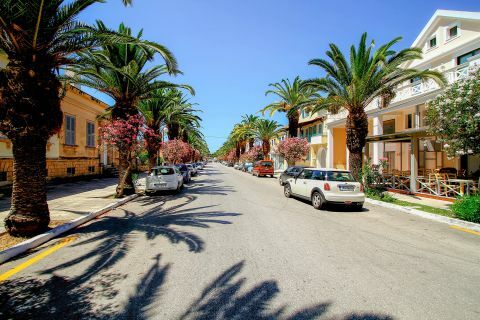 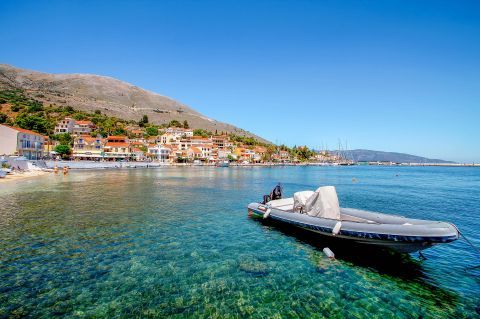 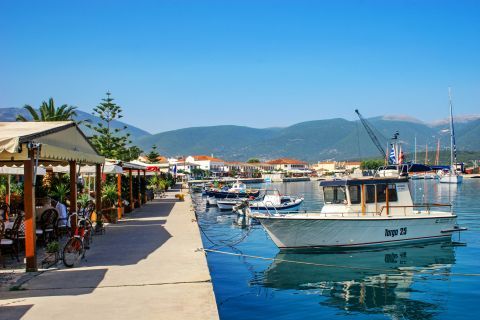 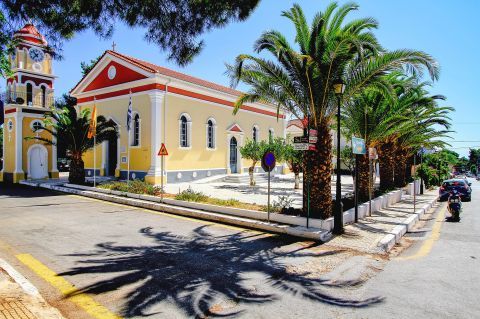 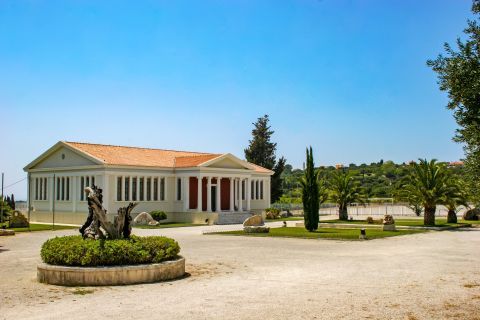 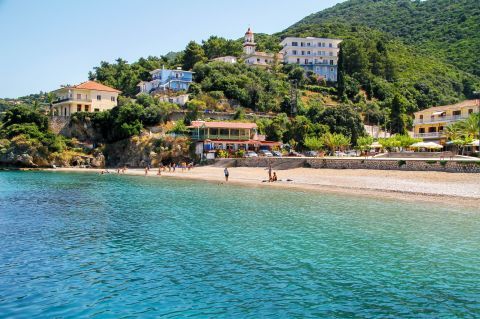