With an area of 374 sq.km., a maximum length of 39,8 kilometers, a maximum width of 16,7 kilometers and a coastline length of 177 kilometers, Andros Greece is the second in size of the Cyclades islands, after Naxos. Gavrio is its main port and it is only two hours away from Athens second harbor, Rafina. Andros is south of Evia and north of Tinos. The island has approximately 8,500 inhabitants. Its coastline is generally rocky with many protected bays, such as Mikrogiali, Kastro, Melissa, Gavrio, Plaka, Vitali and more.

The geography of Andros is characterized by its rich diversity. Small rocky islets surround the island. Capes, mountainous sections, hills, valleys, ravines, and streams are completing the aspect of Andros landscape, hosting interesting monuments that depict the long history of the island. Another characteristic of Andros island is the abundance and high quality of its surface waters, being the richest (in waters) of the Cyclades. Andros is divided into municipalities named Andros, Hydrousa, and Korthi. Andros is the Cycladic island with the most developed vegetation and has the richest flora of all the Cyclades as well.

Because of the non-homogeneity of its ground, Andros offers various impressions to visitors. It is very green, especially on the eastern side because it is where most of its streams are located and the side receiving most rainfalls. There are springs and waterfalls; in higher altitudes, vegetation is quite poor because of the strong winds. At the middle and lowest altitudes, many shrubs can be found. The deepest part of the valleys is full of various vegetations with many olive trees, mulberry, apple, almond and fig trees. Like the rest of Greece, Andros is a paradise for botanists and is particularly rich in plant life.

Discover the Map of Andros

View the map of Andros with the main villages, beaches, and sightseeing. Also, the location of the port and the airport.
View: Map of Andros 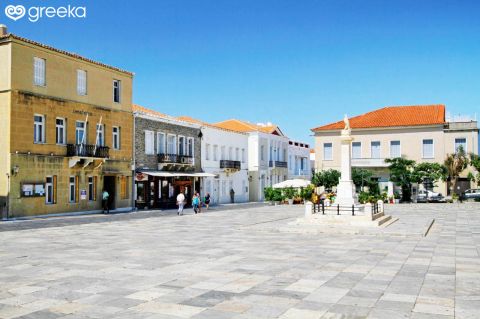