The island of Hydra lies between the Saronic and the Argolic Gulf and is part of the Argosaronic islands, along with Aegina, Poros, and Spetses. Hydra is located south of Peloponnese and in fact, its history is strongly connected with the history of the neighboring mainland. The island is situated approximately 5 nautical miles from the southern end of Argolis peninsula and 40 nautical miles from the harbor of Piraeus from where it can be reached in three hours by ferry and in one hour and a half by hydrofoil. Hydra is an elongated island, with an area of 50 sq km and a coastline of 56 km.

The geography of Hydra is rocky and it has many hills and mountains, the highest peak being Mount Klimaki, which occupies the central zone and raises at an altitude of 600 m. The Zogeri range of mountain lies to the south of Hydra and the Ombari range to the north. Few inlets or natural harbors are located along its western coast but despite the length of its coastline, only a few anchorages are available due to the depth of the seabed dips. The eastern coast is less severe. In ancient times Hydra was covered with pines and had plenty of water (the island owes its name to this abundance of water).

Today the island is totally barren and imports its water by tanker from Peloponnese. The population of the island is about 2,500 and is concentrated in a coastline area of 3 km that has Hydra Town as a center. The capital of the island is Hydra Town which is also its main harbor. The main income of the inhabitants is tourism but fishing is still an important activity.

Discover the Map of Hydra

View the map of Hydra with the main villages, beaches, and sightseeing. Also, the location of the port and the airport.
View: Map of Hydra 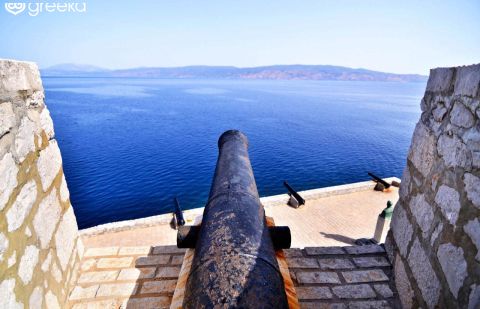