Santorini is among the top destinations in Greece but also in the world and is characterized by its Cycladic architecture: white painted villages that stand on the top of the high red-coloured cliffs. Santorini architecture is featured uniquely throughout its settlements. Whitewashed houses in complete harmony with its volcanic scenery, it is without a doubt that the villages of Santorini were built to meet perfection. Such an example is the beautiful Oia which is known for its neoclassical mansions, small churches, and the narrow cobbled paths and colourful houses. Matching the classic with the modern beauty, Oia offers the most romantic scenery and a plethora of beautiful places to visit.

Fira, the main town of Santorini is pretty astonishing itself located at the edge of the caldera giving breathtaking views to the volcano. The highlights of the capital are the traditional houses which blend with the lovely Venetian characteristics like the arches and vaults and the colourful stairs. Due to the hard weather conditions (heavy hurricanes in winter and solar heat in summer) and the protection from the pirate's invasions, Santorini's architecture is very much similar to the other Cycladic islands. Of unique charm is the sunset of Fira and Oia, for which the island receives thousands of visitors. Among the narrow paths of Santorini are the beautiful churches, architectural jewels that blend in the island's landscape. The settlements of Firostefani, Imerovigli, and Oia offer a breathtaking view to the caldera and the golden sunset making the island an unforgettable destination for the summer vacation.

The Venetian presence left the island a small legacy that counts on a few fortified settlements. The only one that remains intact is the Kastro in the centre of Pyrgos village. Equally interesting is the Venetian castle of Akrotiri, the Argyros Mansion, Kasteli Castle and the Catholic Cathedral of Fira. A visit to the Folklore Museum of Santorini will give you much insight into 19th-century architecture as well as a walk to explore the surrounded villages.

Don't forget to visit the ancient site of Akrotiri in order to get an idea of the architecture during the Minoan times. 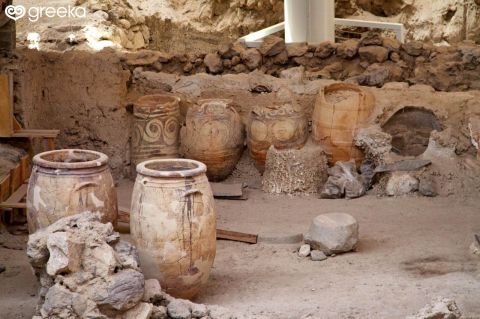