Paros geographically belongs to the Cycladic group of islands, situated in the center of the Aegean Sea. Paros is located between the islands of Naxos and Sifnos. Its length from north to south is 13 miles and its width across the center is 10 miles. The total land surface area of Paros is 165 sq. km.

The ground of Paros is very rich in marble, which played an important role in local history. The marble of Paros was very popular in the ancient days and it was also exported to different other countries around the region. This export of marble brought tremendous wealth to the region. The ancient sculptors used to create statues with it and it was considered the finest marble for the construction of temples.

The total population of Paros today is about 12,000 people. The main port, and also the island's capital, is Parikia and it is located on the west coast, while Naoussa, the second most important village, is located on the northern side. The tallest peak of Paros is Prophet Elias, which rises 770 m above sea level.

There are numerous villages in the region scattered along the mountain slopes, the valleys or the coastline. Some of them serve as tourist resorts, while other regions have kept their original character. In fact, on the northern side of the island, a wildlife hospital has been created for the protection and rehabilitation of wild birds and animals.

The geography of Paros is similar to the other islands of Cyclades. The soil of Paros is extremely fertile. There are rows of vineyards all over the island. The wines of Paros are pretty famous from ancient times for their excellent aromatic flavor. Many local today cooperatives produce and trade the wine production of Paros all over Greece and abroad. Except for tourism, the locals deal mostly with fishing, agriculture and cattle breeding.

Discover the Map of Paros

View the map of Paros with the main villages, beaches, and sightseeing. Also, the location of the port and the airport.
View: Map of Paros 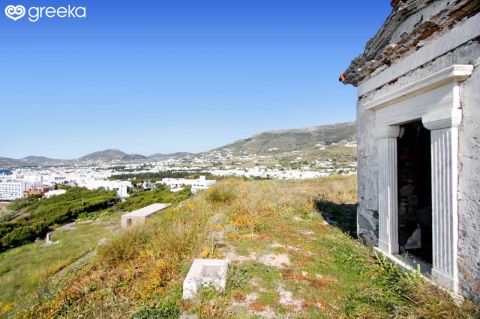 Things to see in Paros

How to get to Paros?