Alonissos is an island in the Aegean Sea, located close to Skopelos, with lush green vegetation to the point that pine woods sometimes reach the numerous beaches on the island.

Alonissos island is part of the Sporades islands. Its surface is 66 square kilometers and has approximately 2700 local inhabitants. Alonissos in an isle of outstanding beauty with the most impressing abysses in the Aegean Sea.

The island has been inhabited from prehistoric times, and it was the object of a number of disputes over it, especially between Athens and Macedonia. Alonissos was conquered by the Romans in the 2nd century AD, and then the Byzantines arrived, who built the walls of the castle of Chorio and left a set of awesome buildings which were unfortunately torn down by the frequent earthquakes on the island.

After the Byzantines, several other peoples ruled the island, such as the Venetians, and the Turks in 1538. Alonissos became part of Greece in 1830.

Alonissos is a peaceful island, quite lively in the Southern area, where there are a number of modest villages with narrow streets and picturesque buildings and houses. Patitiri, the capital of the island, located in this area, offers a variety of transportation services connecting the island with the other islands nearby and the mainland.

There are beautiful locations around Patitiri, such as Rousoum village, which has one of the most beautiful beaches on Alonissos and offers comfortable nightlife establishments, and houses to rent. If visitors go on along the coastline, they will find Votsi Village, much more peaceful than Rousoum Village, and with the typical small townhouses overlooking the sea, surrounded by the yellow-ochre reefs that give the place a very special vibe.

After the serious earthquake in 1965, the physiognomy of Alonissos (and of many other islands nearby) changed once and forever, and whole towns were abandoned by the locals and rebuilt in safer areas. That is the case of the former Capuluogo, located on the hills placed at about 3 kilometers from Patitiri towards the center of the island.

Steni Vala, another remarkable village, is a typical Aegean fishing port and it is located 12 km far from Patitiri. It has some secluded beaches, ideal for those who want to run away from the worldly noise and their business routine.

Alonissos also offers some outstanding tour attractions such as the "National Marine Park of Alonissos - Northern Sporades" (NMPA-NS). This is a valuable natural park in Greece, founded in 1992. The island also has sponsored the first international Multi Terrain Marathon. Apart from Alonissos it also comprises some other 6 islands: Peristera, Skantzoura, Kyra Panagia, Ghioura, Psathoura, and Piperi.

Tourists are really safe and secure in this area, as there are uniformed safety and security agents who exert close surveillance and make sure that everyone is able to swim, photograph or record the area, do water sports and have a good time, but they make sure that nobody fish or hunt in the area. They also make sure that people abide by the restrictions regarding free camping and fires in force in some areas to protect the natural environment, especially Monk seals. 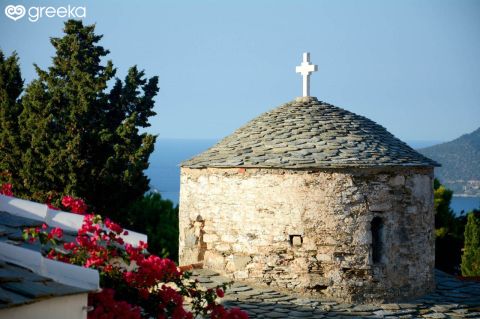