Lemnos island is located between the islands of Lesvos and Samothraki. It has a total area of about 480 sq km, a coastline of 257 km long and a population of about 16,000 inhabitants. The capital and main port of the island is called Myrina and is located on the southwestern part. This is where ferries moor when they come or leave the island. The second largest town of the island is Moudros, which stands in the center of Lemnos. This is most suitable for fishing and small excursion boats.

The geography of Lemnos is quite fascinating, similar to other Eastern Aegean islands. Despite the great number of mountains scattered on Lemnos, the island remains very low and its highest peak, Mount Skopia, rises at an altitude of only 470 meters. Lemnos has various areas of fertile lava soil from which the islanders produce fruits, vines, silk, and wheat as well as famous medicinal earth used in curing open wounds and snake bites. These productions are connected with the history and mythology of Lemnos.

Apart from these productions, the economy of the island is based on fishing, farming and on the military base that has been established there. Apart from the low mountains and the fertile plains, Lemnos also has many bays and gulfs as well as two big lakes where flamingos are living. The amazing coastline of Lemnos is full of beautiful sandy or pebble beaches which are boarding the crystal waters.

Discover the Map of Lemnos

View the map of Lemnos with the main villages, beaches, and sightseeing. Also, the location of the port and the airport.
View: Map of Lemnos 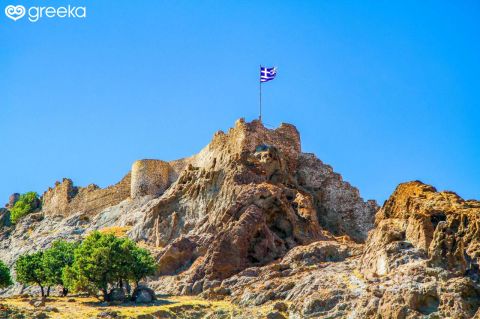