The Castle of Molyvos (or Mithimna) on Lesvos, Eastern Aegean: On top of a hill filled with pine trees, above Molyvos village, on the northern side of Lesvos, there is a strong fortress that dominates the area. The Castle of Molyvos stands as a great historical monument for the whole island and as one of the most well-preserved castles in Eastern Mediterranean. Open to the public, this castle and the castle of Mytilene are the most famous and strongest of Lesvos.

The Castle of Molyvos (or Mythimna) was probably constructed in the mid 13th century and it was renovated in 1373 by the Genovese Frangisk I Guateluzo. However, it also went under reformations by the Turks in 1462, so it is evident that the architectural style went under many changes.

This is a well-constructed fortress with strong walls, signs, coat of arms and other distinctive elements. The Castle is divided into many levels, connected to each other with paved paths. The entrance door of the Castle is made of strong wood, covered by metallic tables. In summer, this site hosts many festivals and cultural events, such as musical concerts, lectures, and theater performances. 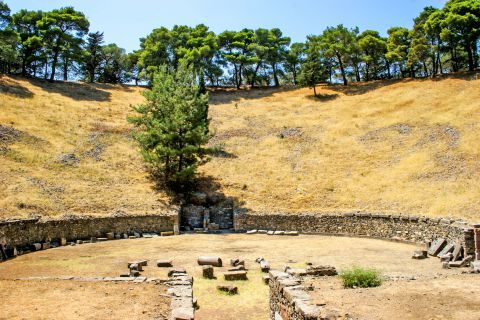