Rhodes is strongly influenced by the many great civilizations of the world. Of major interest are the historic castles, imposing buildings and spiritual sites that bear witness to the unique architectural elements from the medieval and Byzantine times. Particularly, the medieval town of Rhodes is a monument itself and visitors can see here many Catholic churches and castles built by the Knights.

The most important Catholic Church is the Roman Catholic church of Saint Francisco (St Francis of Assisi) located in the old town. Its high bell tower is the symbol of Rhodes and from there the view is spectacular. Built by the Byzantines, in the 11th century, the beautiful Lady of the Castle is a fine example of stone masonry work made by the Knights of St John. It lies in the city of Rhodes, in Symis square.

Another foundation of the knights is the Catholic church of Agia Triada (Holy Trinity) with remains of beautiful frescoes from the 15th century. Of unique interest is the Catholic church of Saint John, the Collacium located in the medieval city of Rhodes. It owns all the characteristics of Gothic architecture and is a famous site. At the center of Rhodes stands the chapel of Sacred Heart and at the cosmopolitan resort of Trianda lies the chapel of St Anne. Both of them inspire peace and a warm atmosphere.

The most famous Orthodox monastery of Rhodes is Panagia Tsambika located in Archangelos village. Although tiny, the monastery lies in two sites, one is perched on top of a high cliff and the other one stands at one side of the road of the settlement. The church is considered miraculous for the women who struggle to conceive. Within the same village, beautiful churches are found like Dormition of the Virgin (18th century), the church of Agia Irini and Archangel Micheal with the most fascinating bell tower on the island.

This monastery was constructed on the hill of Filerimos, close to the site of Ancient Ialyssos. It was built by the Knights of Saint John in the Medieval times and it was reconstructed in the early 20th century.

Built sometime during the rule of the Grand Master Villeneuve (1319-1346), the construction was later, during the Knights era, to be endowed with six chapels and some seven vaulted tombs. 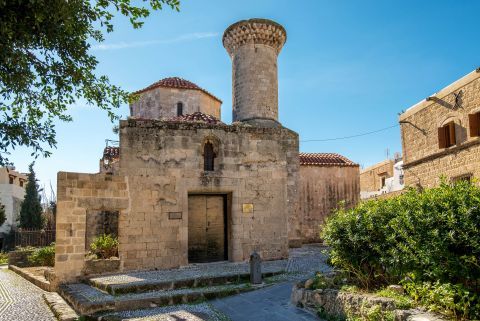 The church of the Holy Trinity is located on Knights street. It dates from the 15th century and it is one of the loveliest churches in Rhodes Town.

The church of the Annunciation of the Virgin Mary has a different style from the usual churches in Greece. It has a gothic architecture and the frescoes inside were painted by Fotis Kontoglou, a renowned Greek painter.

The monastery of Panagia Tsambika is among the most famous on the island. It stands on a hill above Tsambika beach and its icon is considered miracle-working. 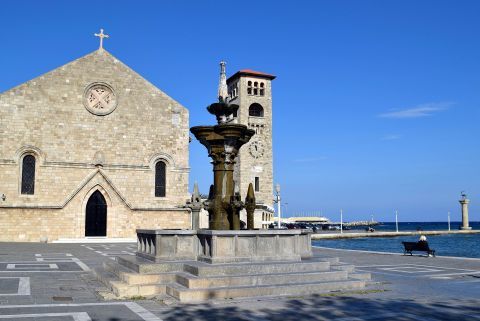 There are two Catholic Churches in the Old Town of Rhodes, as the island was under Italian rule till 1947: the church of Saint Francis and the church of Santa Maria della Vittoria.