The Monastery of Filerimos in Rhodes: The Monastery of Panagia Filerimos is located on a hill above Ialyssos, about 10 km from Rhodes Town. The monastery is dedicated to Virgin Mary the Life-Giving Source (Zoodochos Pighi) and its architecture is much different than the usual monasteries in Greece. It was constructed with a stone in a Gothic style, on the site of an older Byzantine monastery.

The monastery was built in the 15th century by the Knights of Saint John, who had conquered the island that time. Inside, there was the holy icon of the Virgin Mary that the Knights had probably brought to Rhodes from Jerusalem. When the Ottomans conquered the island in 1523, the Knights left and took the icon with them. After floating in Italy, Malta, France, and Russia, this icon is today hosted in the National Museum of Montenegro.

In the region around the monastery, there are the ruins of a baptistery in the shape of a cross, the remains of Ancient Ialyssos and an underground church of Saint George that dates from the 14th century AD. From Filerimos Monastery also starts the path to Golgothas. On top of this path, up on a hill with an amazing view, there is a huge cross, while on the one side of the path, there are engravings that represent the Passion of the Christ. 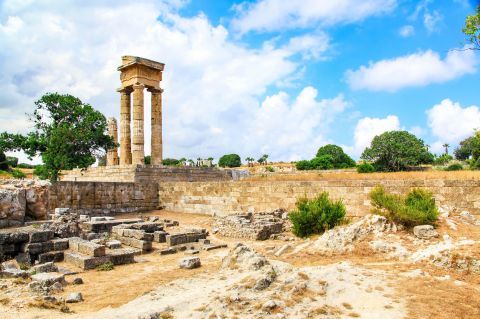