Its capital consists of three settlements: the picturesque small town of Platanos, the tourist resort of Agia Marina and the small port of Pandeli. The sea-sculpted the coastline of the island, making it a lace of small bays, sandy beaches, capes, and protected harbors. Various small islands and islets surround Leros, giving the possibility for visitors to make daily excursions.

The geography of Leros is known for its beautiful hilly spots. The island has many hills and low mountains. Its highest peak is Mount Klidi, rising at an altitude of 320 meters. Short vegetation covers the island endowed by nature, characterized by a landscape with pleasant alternations and landmarks of local history. The island of Leros has an airport, located northwest of the capital, in the Bay of Partheni, on the extreme north of the island.

Discover the Map of Leros

View the map of Leros with the main villages, beaches, and sightseeing. Also, the location of the port and the airport.
View: Map of Leros 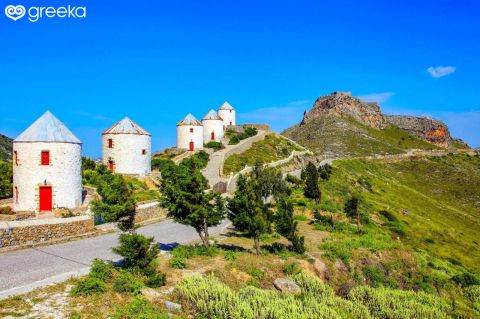