The first traces of human presence in Hydra date from the antiquity as the island was an important trade center during the Mycenaean times. Few findings from excavations can be seen in the Historical Archives Museum of Hydra, although most have been moved to the National Archaeological Museum in Athens.

The Historical Archives Museum was founded in 1918 but moved to its presence building in 1952. It is housed in a large stone mansion just above the port of Hydra. It hosts several manuscripts, paintings and ship models. Only its library has 4,800 books dating the 18th century till today.

Above the port, in the church of the Assumption, there is also a small Ecclesiastical Museum with an interesting collection of Byzantine and post-Byzantine icons.

The Museum of Historical Archives is located in an elegant stone mansion, at the port of Hydra Town. It houses manuscripts from the revolutionary period, paintings and ship models, rare books and other interesting exhibits.

The Ecclesiastical Museum is housed in the Church of the Assumption of the Virgin which stands close to the port of Hydra. It hosts ecclesiastical items, clothing of priests and other holy items that date from the 18th and the 19th century. 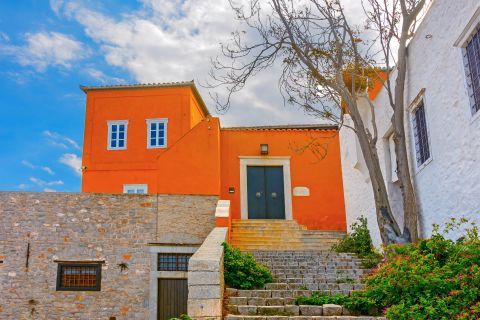 This elegant stone mansion is an outhouse of the National Historical Museum. It includes relics of the Koundouriotis family, such as weaponry, traditional clothes, woodcarvings, paintings, and jewelry.

Things to do in Hydra

How to get to Hydra?

OUR TRAVEL SERVICES IN HYDRA

Explore our travel services & make the most out of your HYDRA holidays!
View all services