The beautiful town of Kalavryta is built over the site of an ancient town from where many findings have been discovered. The history of Kalavryta has been strongly marked by the invasion of the Nazi troops. The town suffered the Holocaust, one of the cruelest actions that the world has ever known. On December 8th, the German troops destroyed three villages of Kalavryta and killed their male population. On December 13th the German locked up all the children and women in the schoolyard and set the school on fire, killing almost 700 people.

The Kalavryta Holocaust Museum was founded in memory of the people who were killed by the Nazi troops. It is built on the site of the primary school where the tragic event took place, close to the center of the town. The museum hosts a great photo archive from the traditional life of the locals in Kalavryta, documents, and items from the personal collections of those executed. Events from that time are screened in a TV monitor. 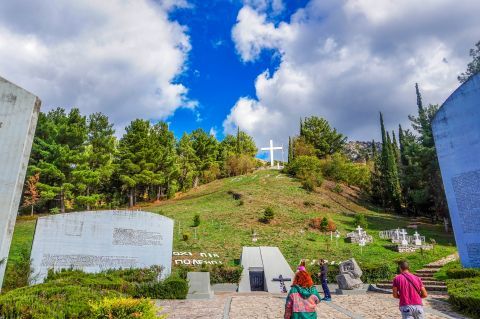 The Holocaust Museum of Kalavryta is housed in the old Primary School, in the central square. It is dedicated to the Holocaust of the town by the Nazi troops.

Things to do in Kalavryta

How to get to Kalavryta?

OUR TRAVEL SERVICES IN KALAVRYTA

Explore our travel services & make the most out of your KALAVRYTA holidays!
View all services