During the early Byzantine period in Thassos, beautiful churches and monasteries were built, some of them were destroyed and invaded by the Turks while other survive to this day. Among them, the most famous lie in Limenas, the island's capital. Among the oldest and most interesting churches in Thassos is the church of Agia Paraskevi lying in the village of Theologos, right in front of the beach. The church is home to a beautiful icon of the Virgin made of wax.

On the way to Alyki village, you will come across the active monastery of Archangel Micheal. It is the largest monastery of the island and houses valuable icons and other ecclesiastical objects. It is worth visiting for its breathtaking location, perched at the edge of a cliff. The Monastery of Agios Haralambos is built on the mountain slopes, around a beautiful pine tree forest, on the way to Chrisi Ammoudia with two windows and a small entrance. There is a big festival on February 10th every year.

This is an old monastery with interesting architecture, located on a hill above Livadi. It has been built on top of a cliff and the view from up there is captivating. 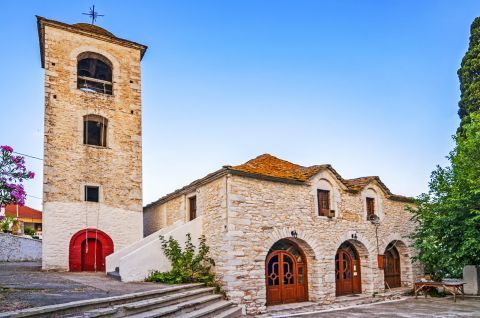 The church of Agia Paraskevi, situated in Theologos, is among the oldest on Thassos. Made of stone and tiles, this church hosts a unique icon of Virgin Mary. The icon is made of wax and mastic and it is considered a work of Apostle Luke.

Things to do in Thassos

How to get to Thassos?