Charkadio Cave in Tilos: Charkadio Cave is located about 2 km south of Megalo Chorio, at the center of Tilos island. This is a very important cave discovered in 1971 by the geologist and speleologist Nikolaos Simeonides. Further excavations brought into light Neolithic items, such as stone hunting tools and pieces of pottery.

The most impressive thing is that in Charkadio Cave fossils of animals have been found, including turtles, deer, and the special dwarf elephants. Scientists believe that these dwarf elephants were living on the island 45,000 years ago and that they disappeared about 4,000 years ago.

These discoveries help scientists to define the geological history of Tilos. As a proof of the importance of this cave, it should be mentioned that the Physiographic Museum of Vienna, one of the biggest in Europe, has a special section dedicated to the dwarf elephants of Tilos. 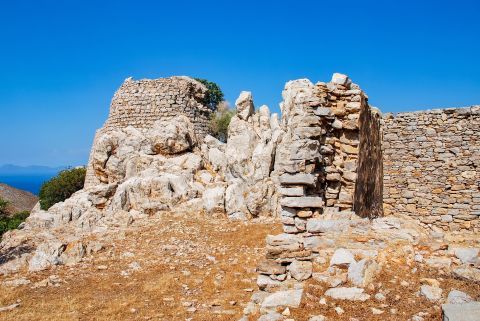