The Medieval Castle of Tilos Dodecanese: The Medieval Castle of Tilos is located to the north of Megalo Chorio, the capital village of the island. Built atop a hill by the Knights of Saint John, during the late Byzantine period, this medieval castle offers spectacular views across the bay of Agios Antonios and a late-afternoon visit probably offers one of the best sunsets on the island. The church of Archangel Michael was built within the castle complex in the post-Byzantine period.

An entire village was once built within the castle walls to protect from the pirates who plundered the Aegean in the Middle Ages and it was not until the 18th century, when piracy was suppressed, that many of the inhabitants started to migrate down and settle closer to the foothill.

The castle and the church enclosed within the walls were built over the remains of a Hellenistic acropolis which included a temple dedicated to Apollo and Athena. The imposing castle had a triangular ground plan, but nothing much remains of it except for the external wall, some ancient and medieval ruins, cisterns and the ruins of the church along with some of its 14th-15th-century frescoes. To the east of the Castle, you can find the ruins of the Messaria fortress, built around 1366 by the Knights of Saint John.

The fortress protected the road leading towards the fertile plains of the island. Within its massive walls, the ruins of several buildings and of a little church are found. The remains of a Byzantine settlement and of small chapels dating back to the 13th century can be found close to the fortress. The walls of the churches are covered with frescoes. Above this fortress, there lies the famous Charkadio Cave, where the fossils of a pygmy elephant were unearthed in 1971. 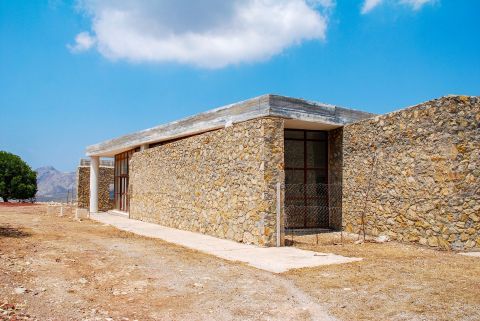