The Traditional Wedding on Karpathos, in the Dodecanese: The traditional Karpathian wedding is perhaps the richest cultural event of the island. The week-long preparations include rituals, like decorating the siasmata (the Karpathian house), the Kathisto Glenti (festivities preceding the religious ceremony) and the antigamos (the second day of the wedding). Local musicians accompany the celebrations, which last for at least three days after the wedding ceremony.

Marriages in Karpathos were previously arranged by matchmakers and parents. The engagement used to take place at the bride's house, sometimes followed by an official ceremony. Weddings were often celebrated on the Sunday after Easter, a week after the engagement. Seamstresses were sewing the bridal dresses, the couples house was whitewashed and furnished, and food and sweets were prepared.

On the wedding day, the groom and his entourage rode out on lavishly-decorated horses to accompany the bride from her home to the church. At the reception, the guests were kissing the wedding wreaths and the groom would break and open a pomegranate in their new home, to ensure marital bliss.

Many of these rituals continue today. The bride still adorns gold sovereigns called sigoura. She adds to them gradually, making a similar dowry for her children. Housewives bake cookies called leoudia and decorate the bride's home with flowers. Village men chop wood for ovens and bonfires and slaughter animals for meat. Music plays early on the wedding day and guests arrive bearing silk handkerchiefs on canes.

After the nuptials, a sesame-and-honey pastry called sousamomelo is served, while the main dish at lunch is chondros (meat in bulgur). Dancing commences in the church courtyard in the early afternoon and goes on till early morning. This includes the foumisto dancing, involving the exchange of witty couplets. A family feast takes place on the first Sunday after the wedding, concluding the festivities. 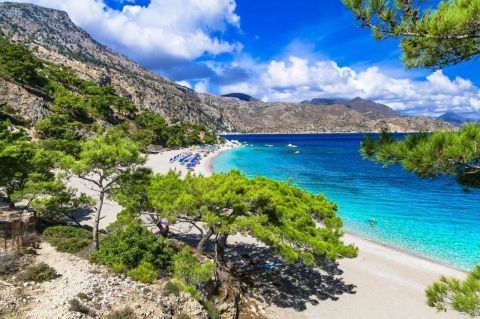