The rich religious history of Halkidiki is evident in the plethora of beautiful surviving churches from the early Christian period. The unique monastic state of Mount Athos has influenced the history of Greek Orthodox art.

The monastic community of Mount Athos lies in the third peninsula of Halkidiki, the only location in Greece devoted to praying. The entire region consists of twenty wonderful Byzantine monasteries lost among the enchanting landscape, out of which 17 are Greek, one is Russian, one Serbian and one Bulgarian. Most of them look like medieval fortresses resembling small states.

Polygyros, the capital of Halkidiki is home to some fine churches from the 19th century, the most important being Agios Nikolaos, a true jewel dominating the heart of the town. In a beautiful location with a splendid view to the Polygyros lie the chapels of Panagia and Prophet Ilias.

You have a chance to see numerous churches in the villages of Halkidiki. In Afytos is the church of Agios Dimitrios and in Nea Potidea is the church of Taxiarches which is now dependant on the Mouth Athos Dochiarion Monastery. The 16th-century church of the Assumption of the Virgin, the 5th-century Christian basilica of St George, the chapel of the Apostle Paul and the Monastery of the Annunciation of Vatopedi are found all in the village of Nikiti.

Vavdos is perched on the highest altitude of Halkidiki and is home to two beautiful churches dedicated to the Virgin Mary and Prophet Ilias. Quite remarkable is the 16th-century church of Panagia Faneromeni that stands along the seafront of Nea Skioni village.

Mount Athos is a self-governed part of the Greek State, famous for its old Byzantine monasteries. Women are not allowed to enter the area, while men need special permission to go. There are frequent boats from Ouranoupolis that go around Mount Athos. 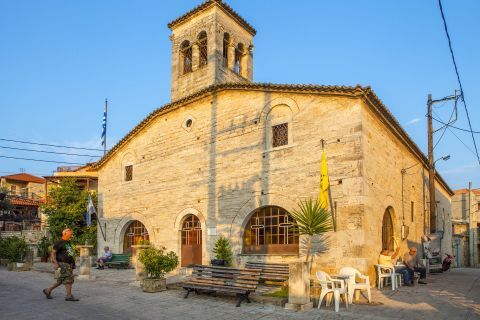 Constructed in 1858, this beautiful church is located in the square of Afitos. It has a unique architecture with three arches and a tall bell tower.

Things to do in Halkidiki

How to get to Halkidiki?

OUR TRAVEL SERVICES IN HALKIDIKI

Explore our travel services & make the most out of your HALKIDIKI holidays!
View all services