Thimena in Fourni, Eastern Aegean: Thimena village is the only settlement of Thimena island, the second largest island of Fourni complex. This is a village from another world, very small and unspoilt, having its very own rhythms. Its name comes from the thyme plants that grow on the island. It is built amphitheatrically at an altitude of 564 meters. The small port receives excursion boats from Fourni village and many fishing boats.

Meltemi is a traditional coffee shop in Thimena and the first thing that welcomes you at the port serving cold refreshments and pizzas. There are several coffee shops at the top of the village, offering impressive views to the sea. Thimena has a population of 150 inhabitants and the biggest part resides in Thimena while very few people stay in Keramidou, the main beach of the island. The remote character of Thimena is evident in every corner, with the low whitewashed houses that carry a traditional character.

Stroll around the picturesque alleys and make a stop to taste the local sweets and ice creams in the village. Next to the village, there is a monastery and a small islet. Thimena boasts magnificent beaches, where you will most probably be totally alone, located within a short distance from the port. Keramidou is the most frequented beach of Thimena, with few rooms to rent. In contrast to the main island of Fourni, Thimena has almost no tourist facilities and its road network is not developed. 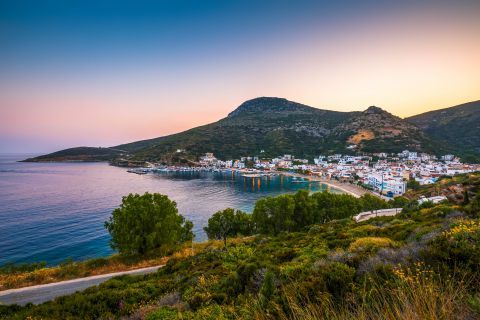