Troulida beach Mesolongi: The beach of Tourlida is one of the picturesque locations of Mesolongi. In fact it is a small islet located at about 5 km from the town and used to be the island where the ships went in seek for shelter before the construction of the harbour of Mesolongi. This use was due to the shallow waters that surrounded this area. However, since 1885 it is connected by road to Mesolongi. The name Tourlida was given to it after the marine bird species that were found in there, the tourlides, known as curlews in English.

Another species that can be appreciated on this beach is the black salt marsh. Also, the funny-shaped white herons can be seen close to Tourlida. Usually, they give a nice spectacle, as they come in flocks of 20 or 30. Apart from some bird watching, the great waters of Tourlida invite visitors to swim and relax. In addition, they are great for fishing, and that is why many fishing huts can be found in the sea. In fact, there is a shallow area that is full of these water-houses, which includes part of the Ionian Sea, and hosts one of the biggest salt factories.

The whole environment of the beach is ideal for fishing, not only because of the geographic advantages that in this case make it very productive, but also because of the predominating peace, and the surrounding picturesque landscape. One of the best times of the day for appreciating such environment is the sunset, when orange reflections dye the sky and the tranquil water. Tourlida beach counts on the settlement it belongs to when it comes to facilities. This settlement has many wooden houses, called pelades, as well as two bar restaurants and a cafeteria. 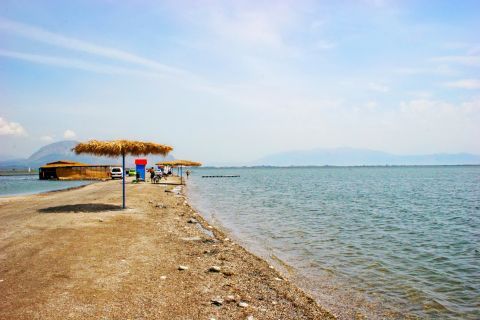