Etoliko village Mesolongi: The town of Etoliko is at 20 km north west from Mesolongi, in the southern area of Etoloakarnania. It counts on approximately 4800 inhabitants, and is the seat of the municipality of Etoliko.

In the 19th century, on the Greek Independence war against the Ottoman Empire, Etoliko went through three Turkish sieges after which it becomes a part of Greece. Etoliko is catalogued as a town in many cases, not only because of the number of inhabitants it counts on, but also because it has some locations that are typical from such locations. It has its own high school, as well as a lyceum. It also has several churches, a small post office, a main square and an agricultural and commercial enterprise.

However, this is not an ordinary town, as its oldest part lays on a small separated island after the same name, connected to the mainland by two bridges, one on each side. Regarding the landscape of Etoliko, it has robust rocky hills to the east and green areas along which there are some farms to the west, approximately up to the Acheloos river.

The main attraction of Etoliko, however, is its lagoon, to the east. This lagoon was created by an earthquake, and is actually divided into three parts. The part of Etoliko surrounds the municipality and extends over 14 squared kilometres in area, ending at the village of Stamna, south of Acheloos River. The other two sections are Mesologi and Kleisova.

The whole lagoon extends over 131 square metres, and is the largest in Greece, with a depth of 28 metres. Its total production is very rich, to the point of reaching 800,000 kilos of fish, 100,000 kilos of eel and 1,500 kilos of roe. The water in Etolikos lagoon is sweet, which makes it better for fishing than the neighbouring lagoon of Mesologi. Both lagoons have many wooden huts, scattered along their waters. Large areas of the delta are under nature protection and hunting is not allowed.

There are coastal protection works, as well as projects for modernising the traditional ways of fishing on these area, such as an extensive network of bridges, embankment fisheries, fisheries barriers, pump stations, channels, and buildings for storage, refrigeration and packing. This area also hosts 170 species of birds. The mentioned island lays between the lagoon of Etoliko on its north, and the Messolonghi lagoon, to the south. It has a good amount of greenery, as well as some residential houses and good taverns with delicious specialties, like salted or smoked Avgotaracho, the egg of a fish called kefalos, which is comparable to the caviar.

The access of this island is given by the arch stone bridges, dating from the late 19th century, Etoliko lagoon is also very special because it constitutes a great landscape, ideal for strolling. The best time is during sunset, when the vast waters reflect the vibrating colors of the sky, creating a dramatic scene.

Things To See And Do In Etoliko 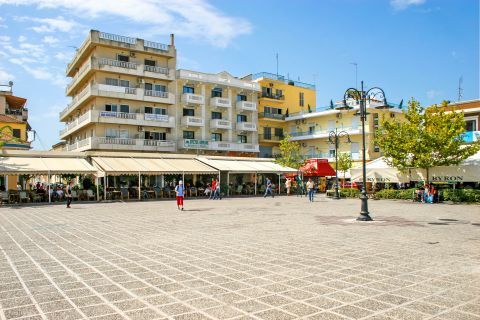