On the foothills of Mount Parnassus, over the imposing landscape that is formed between the two huge rocks lays the worldwide known sanctuary of Delphi and the most popular sanctuary of ancient Greece. Your walk can begin from the sanctuary of Athena Pronea, where is found the mysterious Tholos and the gymnasium and them move on to the complex of buildings including the Temple of Apollo, the famous Corysian cave and the Castalian Spring nestle in the forested slopes.

Known as the center of the world, Delphi Greece offers a plethora of cultural monuments such as the Roman stadiums where Greeks organized the Pythia. A little further lies the ancient theatre of Delphi and the walk ends at the archaeological museum that displays the most famous finds that were brought to light from the excavations. The sacred site which is surrounded by walls consists of the Temple of Apollo and the theatre which accommodates 5000 spectators.

The modern town of Delphi is a natural continuation of the old with great tourist infrastructure. Perched on the south slopes of Parnassus Mountain, the architecture of Delphi is special and the town offers a spectacular view to the olive tree forest of Amfissa. Several churches exist in Delphi like the church of Agios Nikolaos that hosts the relics of many saints. Of high interest is the old church of Agios Konstantinos, a perfect monument with outstanding artworks. 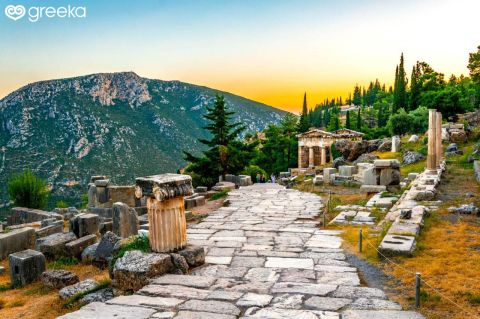