The Neoclassical architecture flourished greatly there until the early 20th century. Chora is the only settlement that best represents the characteristic architecture as it has been declared as preservable maintaining its unique layout that consists of narrow streets and steps, whitewashed yards with flowers, uncountable churches, and beautiful houses.

The newer houses were built using local materials like stone and wood which are characterized by the Macedonian architecture. These features were brought from the Macedonian emigrants who influenced the original layout of Skopelos island. During this time many two-storey and three-storey buildings were founded with wooden roofs. The unique identity of Skopelos has many influences including the Venetian, Macedonian, urban and Neoclassical features.

Houses that very much resemble the Cycladic architectural style are also associated with these features and visitors can admire the houses with balconies and big flowered yards. Glosa is famous for its characteristic Macedonian features and its picturesque neighborhoods. Of outstanding architectural interest are the Byzantine monuments, mostly monasteries that surround Skopelos Town. 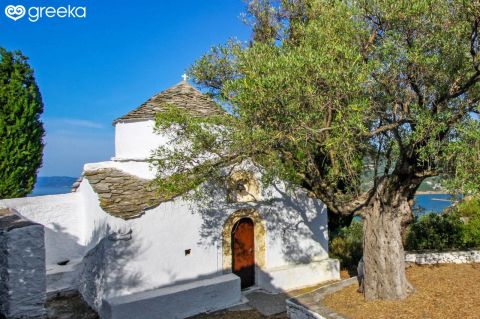