Poros is located between the Argonic and the Saronic Gulfs, being part of the group of islands called the Argosaronic islands that belong to the prefecture of Attica. Located in the Aegean Sea, Poros was once two different islands, today reunited by a narrow channel. Kalavria (ancient Calauria) is the most extended area, and Sferia (ancient Sphaeria), to the south, is the small promontory where the island's capital is situated. Poros is located 32 nautical miles from Piraeus and it is separated from Peloponnese by a narrow channel of 250 m. Due to this close distance, the history of Poros was always connected to the history of the neighboring mainland.

The geography of Poros features many interesting spots from where you can enjoy the entire Saronic gulf. The island of Poros is volcanic and very mountainous. Its highest peak is Mount Vigla, rising at an altitude of 360 m which offers a panoramic view over Aegina, Agistri, and Athens to the north and over the Argolida peninsula to the west. Poros is covered with dense and verdant vegetation, especially on the southern shores, which are full of tall, thick pines, olive, almond and fig trees as well as vineyards. The north and east shores of the island are not as densely covered. A very famous forest in Poros is the Lemon Forest, a lush green area with lemon trees close to Galatas Town.

Discover the Map of Poros

View the map of Poros with the main villages, beaches, and sightseeing. Also, the location of the port and the airport.
View: Map of Poros 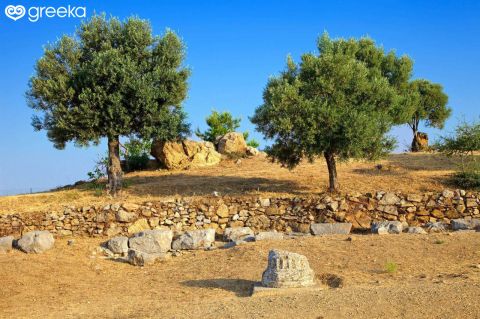