The Temple of Ellanios Zeus on Aegina: The temple of Ellanios Zeus stands on Mount Ellanion, the highest mountain of the island. It was dedicated to Zeus, the most powerful of all gods. According to mythology, in a period of drought, the oracle of Delphi told Aiakos, son of Zeus and king of Aegina, that he should plead to his father in order to bring rainfall to the island again. The plea was heard and Aiakos built a temple to honor Zeus. The temple is found today in an area known as Sfirixtres.

The ruins of the temple of Ellanios Zeus reflect the magnificence of the ancient constructions. There still remain two huge terraces, some cisterns and a staircase next to a Hellenistic wall. The temple gives an amazing view to the Saronic Gulf. Right next to the temple, you will find the church of Agioi Taxiarxes. 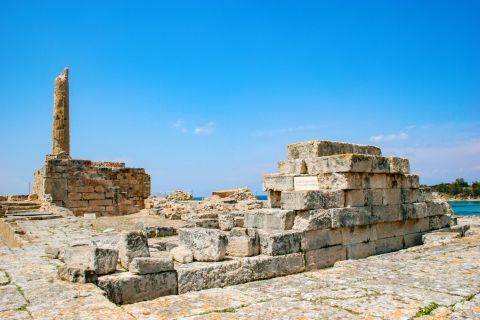