The history of Sparta is worldwide famous for its strict society's rules and the warfare profile. According to ancient Greek mythology, the city of Sparta was founded by King Lacedaemon, the son of Zeus and Taygete. It was a small town in the middle of a valley and surrounded by huge mountains. In the poems of Homer, Sparta is the kingdom of Menelaus and Helen of Troy. It was from this town that Paris abducted Helen and set the beginning of the famous Trojan War. Gradually, Sparta grew up to become a powerful town that based its power on the military excellence of its citizens. Like ancient Athens was famous for its intellectual culture, Sparta was glorified for its courageous soldiers.

The Spartans believed that the life of every individual should be spent in dedication to the state. When a child was born, the eldest statesmen of Sparta would visit the family to check on that newborn baby. If he was found fit, he would be kept in the family. Otherwise, if the child had a physical or mental disability, it would be banished to die by throwing it in the gorge of Keadas. This way they would make sure that Sparta had strong citizens to protect it. An interesting feature is that according to historians, Sparta was never fortified. The Spartans believed that walls are unnecessary because the brave citizens would protect the town.

Education of the boys

The education of the children in ancient Sparta was very strict. The boys left their family at the age of 7 and went to stay in state dormitories. They were divided into small groups and the strongest of them were made the leaders of those groups. They were treated in a very harsh manner by their teachers to become strong and fight against all sorts of obstacles. Boys would sleep on the floor, eat bad food and wear light clothes even in severe winter months. In the day, they were trained as soldiers and learned to obey all rules without any question or doubt. Trainers would also leave them hungry and thirsty to make them steal food. Through stealing, the Spartan boys would learn to be cunning. However, if caught, they would get severely beaten up.

The Spartan girls also followed strict rules. They lived with their families and learned all sorts of military exercises, and also how to run the household, spin, and weave. In character, the Spartan women were strong and tough. Their mission was to grow up strong sons for the city. In opposition to all other towns in Greece, women had an active role in society: they could take decisions, own property, go everywhere and attend public occasions.

A Spartan man was allowed to marry at the age of 30 so that he would give his best years to serve the town. Even then, he would secretly visit his wife. Their language was short and precise, while the education they received was minimal. Coins were made of iron in ancient Sparta, not gold or silver, to be heavier and prevent corruption of the citizens with money. As all Spartans were dedicated to military duties, the farm was cultivated by slaves, named Helots. These slaves were mostly war prisoners from the neighboring region of Messenia. The slaves lived in bad conditions, had no right at all and frequently revolted, but all their revolts were sustained.

Another social group in ancient Sparta was also Perioiki, who were not Spartans in origin but resided in the suburbs of the town and dealt mostly with the trade. The king was the supreme governor of Sparta and the interesting thing is that the town had two kings, one acting as a substitute of the other. This way, if one king was killed at war, the town would not be ungoverned. All these strict rules and the social structure were set in Sparta by Lykourgos, a semi-mythical figure of the 8th century BC. These reforms made the town powerful and gave it a special character in the Greek antiquity.

The most important event in the history of Sparta is the Battle of Thermopylae, when King Leonidas and his 300 soldiers refused to leave the battlefield and stayed to fight the enormous Persian army, knowing beforehand that they would lose their lives. In fact, it was dishonesty for a Spartan soldier to return home defeated. He would return either as a victor or dead. If he returned defeated from the battlefield, then the town did not accept him.

The great opposition between Sparta and Athens climaxed with the Peloponnesian War (431-404 BC). In the beginning, the Spartans were losing the war but when there was an outbreak of plague in the walls of Athens, the Spartans started to win. Moreover, the help of an Athenian general named Alcibiades, who gave military advice to the Spartans against the Athenians, was very important. In 404 BC, the Spartans crushed the Athenian fleet completely, destroyed the walls of the town and established a tyrannical regime in the former democratic town.

However, their victory was soon followed by a crushing defeat in their own homeland, when the Theban army under the leadership of Epaminondas marched to Peloponnese in 369 BC. In the war that followed, the Spartans were defeated and all the Helots were set free. In the aftermath of this war, things started to change dramatically. All Spartan men now had to take care of their own farmlands and spend less time on war training.

From ancient to recent times

Gradually Sparta declined and it became just another small Greek state. Very soon, it became prey to the power emerging in northern Greece, Phillip II of Macedonia, who came to the throne in 359 BC and he had conquered all Greece by 339 B.C, including Sparta. Years later, the Romans conquered Sparta in the 2nd century BC and gradually it followed the fate of all Greece. In the Byzantine times, Sparta declined for the development of Mystras, a close fortified town. It remained a small village till the middle 19th century when King Otto decided to restore it, for historical reasons, with a decree of 1834 and to build a modern architectural plan for the town. 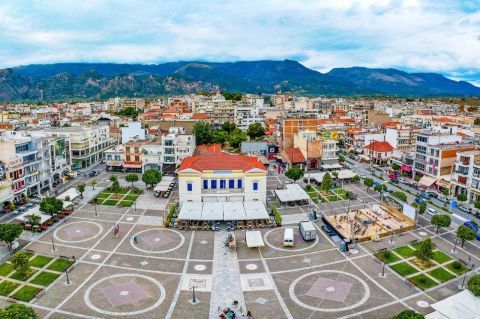