It is situated near the ancient sanctuary of Asklepios, a celebrated healing center of the classical world. It was used as a therapeutic and religious center dedicated to Asklepios, the god of healing. Today the sanctuary is an extended archeological site with interesting buildings. The theatre is surrounded by lush greenery, an integral part of the theatre itself. This famous ancient theatre distinguishes for its architectural symmetry and the great acoustics.

Due to its incomparable acoustics, the actors can be perfectly heard by all 15,000 spectators, as you can even hear the sound of a pin dropping. It is known from the antiquity until the present days for its size, the unique architecture and harmonious proportions. It was built by the architect Polykleitos on the side of a mountain and overlooking the sanctuary of Asklepius. This is a superb example of classical theater with an orchestra and the circular area between the seats and the stage. The highest distance of the concave is 58 meters, while the diameter of the stage is 20 meters.

For centuries the monument remained covered by a slope of trees until the year 1881, when several excavations took place. As the theatre was built after the classical times, not a single original ancient drama had been presented there, but all performances were repetitions of classic plays. Since 1938, when modern dramas started to be presented again in the theatre, it has hosted hundreds of plays.

The famous Epidavria Festival, presently Athens Epidaurus Festival, begun in1954 and it is held every summer with famous ancient dramas or modern plays. Over the years, the festival has hosted both Greek and foreign artists. 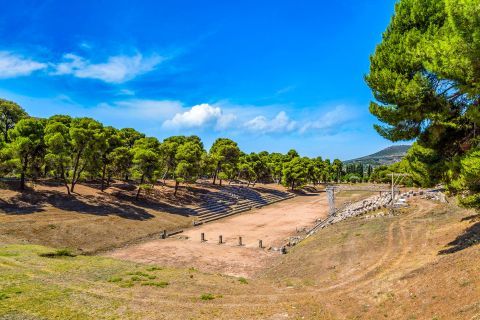