Thessaloniki offers many religious attractions among which are the abundant Byzantine churches found in the upper town and the wider region. Visitors have an opportunity to admire a thousand years of unique architecture and well-preserved monuments.

One of the closest churches to the town that still stands proudly to this day is Agia Sofia, the largest and most famous Byzantine church in Thessaloniki. It was built in the 8th century over the ruins of a paleo-Christian church that was destroyed from the earthquake. It used to be a Turkish mosque. Along with other churches from Istanbul, Agia Sofia represents the Byzantine architecture.

The church of Agios Dimitrios lies in the heart of the old town, on the homonymous street. It was initially a small Byzantine church built over the ruins of a Roman spa. Bishop Ioannis founded the five-aisled basilica and between 1493 and 1912 it was used as a Turkish mosque. In 1917, the church was entirely burned out and in 1949 it was completely renovated. Today it is one of the most famous pilgrimages in Greece and the patron saint of the town.

One of the most valuable examples of Byzantine architecture is the church of Panagia Chalkeon dedicated to the Virgin Mary. It was founded in 1208 at the center of the town, near the ancient agora. It is well decorated with carved marble and well-preserved frescoes.

The 5th-century church of Panagia Achiropoitos is one of the best surviving monuments that exist in the city of Thessaloniki. It was the first Orthodox Church to be converted into a Turkish mosque. It hosts many beautiful frescoes from the 13th century and is open to the public.

The 14th century Church of Agios Nikolaos Orphanos is on the list of UNESCO World Heritage Sites and visitors are impressed by the surrounding environment and its well-decorated interior. Nearby is the monastery of Vlatadon, the only surviving monastery from the Byzantine era. It offers a breathtaking view to the entire town of Thessaloniki. Other churches in the town of Thessaloniki are Agios Panteleimonas, Agios Athanasios, Agios Antonios, and Agia Ekaterini.

The church of Agios Dimitrios(Saint Demetrius) is the most famous church in Thessaloniki. This is the patron saint of the town and its celebration on October 26th is a local holiday. This church dates back to the Byzantine Times and it was built on the exact location where Saint Demetrius martyred. In fact, the basement of the church is the place where the saint was tortured for his faith and died.

Located in the city center, this is among the most important churches of Thessaloniki. It is not known where exactly the church of Saint Sofia was originally built. The most possible is that it was constructed after the Church of Saint Sofia in Constantinople, as they have many similarities in the architectural style. Some actually believe that the two churches were built by the same architect, Anthemios.

Located in Ano Poli, this small church is one of the oldest in Thessaloniki. It was built in the 14th century and contains valuable frescoes from the Byzantine times.

On the southwest of the archaeological site of Roman Agora, there is the Byzantine church of Panagia Chalkeon. Its name means "Virgin Mary of Cooper Workers" in Greek, as there were cooper workshops living in the area.

Located in Ano Poli, this is the only monastery that works in the town of Thessaloniki. Constructed in the 14th century and dedicated to the Transfiguration of the Christ, only the katholicon (main church) survives today. 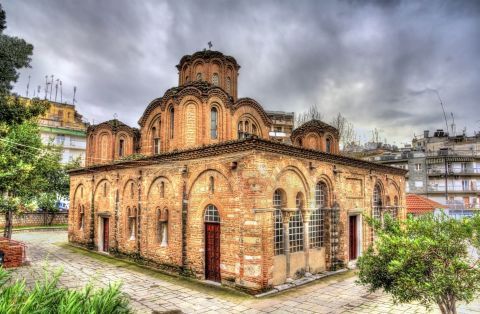 This beautiful 14th-century Byzantine church was designed on a cruciform ground plan, with five domes and elaborately patterned brickwork. 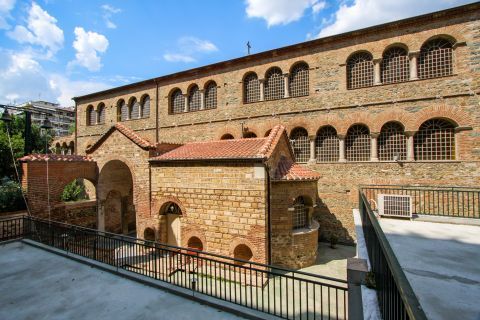 This name of this church actually means the "Virgin Mary Not Made by Human Hands" in Greek. It is one of the most important paleo-Christian monuments in Thessaloniki and one of the oldest churches in Greece. The construction of the church started in the 5th century AD on the remains of a Roman bath. Along with its history, though, it has been reconstructed many times. 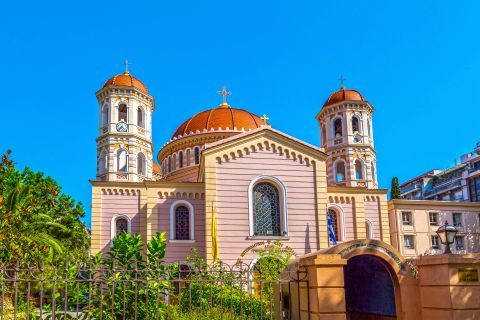 This is the Metropolitan Church of Thessaloniki and it is dedicated to Saint Gregory Palamas, an Archbishop of the town who lived in the 13th century and who is considered as one of the most important saints of the Orthodox Church. The church has a red round dome and it is located in Agias Sofias square. It celebrates twice a year: on November 14th, the day of the saint's death, and on the second Sunday of the Lent.