Religion is an important aspect of Greek culture. Greece is a profoundly Christian Orthodox country with countless examples of holy sites such as churches and historic monasteries scattered in the Greek land and the Greek islands. The rest of the population consists of Muslim, Roman, Catholic and Jewish religions. The Orthodox Church forms the third largest branch of Christianity after the Roman Catholics and the Protestants.

Of unique interest are the architecture and the character of the churches in Greece, scattered on top of the hills, in isolated spots among green landscapes, at the center of large squares and amidst the picturesque quarters. The Orthodox churches are characterized by their particular domed architecture and the well-decorated interiors with beautiful frescoes and holy icons. Their passionate character charms everyone and varies depending on the construction period and the region of Greece.

You will find below a guide to the most important monasteries and churches in Greece and links to churches in many locations in Greece.
Read also: After reading about the churches, get also informed about the religion in Greece.

There are many churches of outstanding interest in Greece. We have selected to describe some of the most important and popular ones. For more churches in Greece, you can find more information about churches in different regions and locations in Greece and the Greek islands. 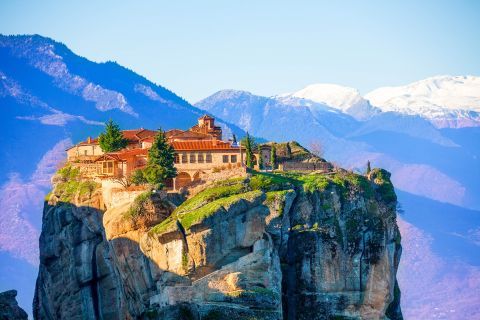 Meteora is the second largest monastic state, after Mount Athos located in Thessaly area, close to kalambaka. It is a living monument part of the world culture and consists of 24 monasteries perched on the huge smooth grey rocks. Today, only 6 of them are actively inhabited by either monks or nuns. Most of the monasteries were built by hermits between 14th and 15th century. Given the secluded location, it is worth mentioning that the survival of these monks was based on the use of the fertile valleys where corn, grapes, and potatoes were cultivated. Meteora is a unique place with a divine atmosphere and a bewitching view from the top of the rocks. 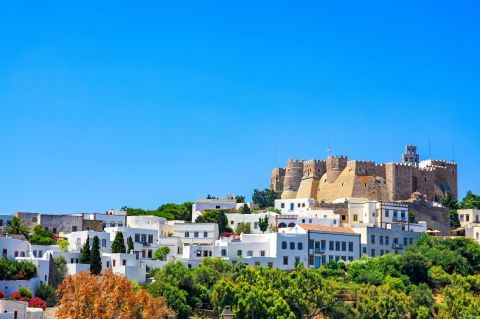 The Monastery of Saint John is one of the most important religious sites in Greece located in the holy island of Patmos. It is built next to the cave where Saint John wrote the Book of Apocalypse (Revelation). It lies at the center of the island, on the hill above Chora. Its strong walls make it look like a fortress and inside are many chapels. It was built in 1088 by Saint Christodoulos. It can be accessed by the stone paths. 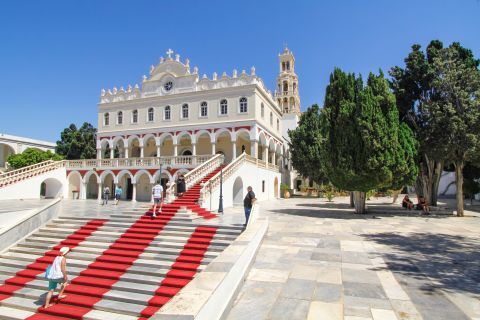 The Church of Megalochari in Tinos island is one of the most important pilgrimages in Greece. On this holy site, the icon of the Virgin Mary was found, after a vision of the nun Pelagia. Tradition has it that the icon is miraculous and visitors arrive by thousands to pray and ask for help (usually for health issues). The church is located on a hill above Chora and pilgrims go on their knees from the port to the church entrance. Inside the monastery complex lies a great chapel and a lovely fountain with holy water. 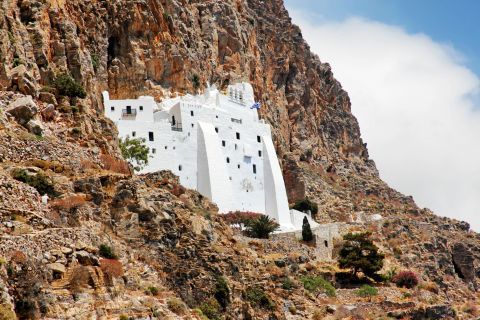 The Monastery of Panagia Hozoviotissa is one of the most important Byzantine monuments in the Aegean standing on the slopes of Amorgos island, above the sea. The monastery was founded in 1088 in this symbolic site by Alexios Komninos who found the miraculous icon of the Virgin on this exact place. Thousands of pilgrims visit the Byzantine monument for prayer and relaxation as the view is breathtaking. 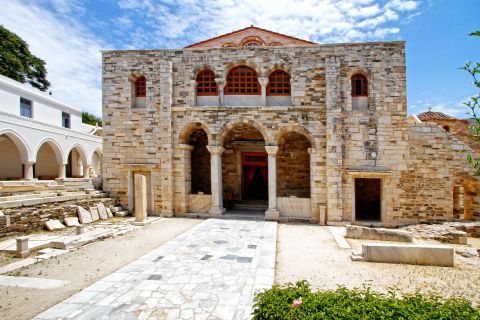 The Church of Panagia Ekatontapiliani, one of the most important monuments from the paleochristian times is located in Paros island, in the village of Parikia. The church complex dates from the 6th century and consists of two churches dedicated to the Virgin and Agios Nikolaos. Many consider the church as miraculous and thousands of pilgrims visit every year on the 15th of August, the day of its celebration. 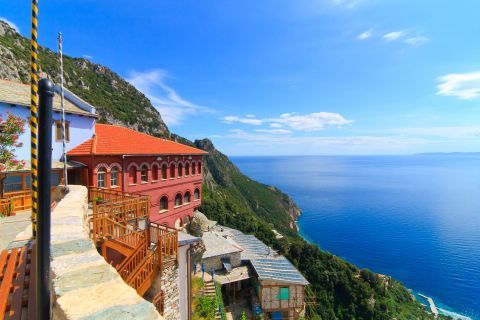 Mount Athos or Holy Mountain is the most important monastic state complex in Greece located in the eastern peninsula of Halkidiki. It consists of 20 Orthodox monasteries. It counts on 1,400 monks who live in ascetic ways, even in caves, like hermits. Women are not allowed to enter Mount Athos and men need special permission. Every monastery is a rich storehouse of medieval history with many paintings, manuscripts from the Byzantine era.

You will find below information about churches you can visit in some popular locations and Greek islands:
Santorini, Mykonos, Paros, Skiathos, Rhodes, Kos, Heraklion in Crete, Zakynthos and Corfu.