It is true that Thassos architecture has much resemblance to the original style of the Eastern Aegean islands. This verdant island is one of the gems in the Aegean, known for its traditional architecture with the typical stone built houses and their colorful yards that create a friendly and welcoming atmosphere. Here visitors will see an interesting mixture of modern buildings and ancient remains like theatres and sanctuaries as well as many Byzantine churches scattered along with the capital and countryside.

The architecture of Thassos island distinguishes for the earthy colors, the grey stone roofs, and the paved paths. The Macedonian layout dominates in the houses and churches: stones and marbles blend with wood, in the vaulted doors, tiled roofs, traditional balconies, and flourishing gardens. The surviving houses of Thassos Greece date from the 18th century and onwards. The fear of the pirates had a strong impact on the particular architecture of the houses which had a defensive character. Some characteristic examples of this architecture are found in Theologos and Kazaviti.

The setting is totally different in Limenas and Limenaria with two or three-storey Neoclassical style houses, luxurious facades and beautiful details which follow a more austere character. A walk must also include a visit to the ruins of the Venetian castle in Limenaria and other ancient remains on top of Limenas. 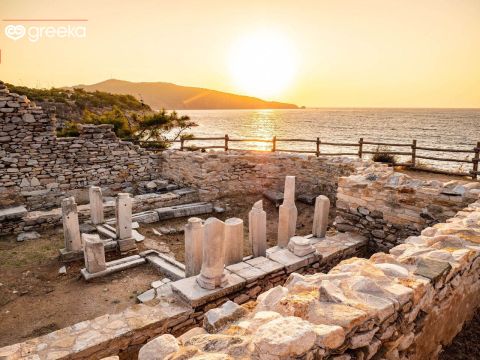