Only eighteen nautical miles and a matter of minutes separate Samos from a completely new world, that is found on the East. We offer you a unique one-day excursion to Kusadasi, the most cosmopolitan town in Turkey with its famous bazaar.

We pick you up from your hotel and head to Pythagorio port where you pass through passport control. The boat departs at 07:30am and arrives in the beautiful Kusadasi at 09:00am Upon your arrival to Kusadasi we will visit Ancient Ephesus. This site is famous for the temple of Artemis- one of the seven wonders of the world, which was constructed around 550 BC.

Ephesus was an ancient Greek city. It was spotted on the coast of Ionia, three kilometers southwest of the present-day Selçuk in İzmir Province, Turkey. It was built by Attic and Ionian Greek colonists in the 10th century BC on the site of the former Arzawan capital. During the Classical Greek era it was one of the twelve cities of the Ionian League. In 129 BC Ephesus came under the control of the Roman Republic. Apart from the Temple of Artemis, in Ephesus there are also some more monumental buildings, like the Library of Celsus and a theatre capable of hosting 25,000 spectators.

What is more, Ephesus was one of the seven churches of Asia that are cited in the Book of Revelation. It is believed that the Gospel of John was written here. The city was the site of several 5th-century Christian Councils.

After our tour to Ephesus we will return back to Kusadasi, which in the Turkish language means island of the birds. It took its name from the small island that is found when entering the port. It is one of the most visited towns in Turkey. It impresses with its first class tourist facilities, which by no means hide the strong eastern atmosphere that exists in every corner of the town. Lately there has been great development and thousands of rooms are available in the large tourist center and a multitude of cruise ships and smaller boats arrives to the port on a daily basis .

Kusadasi is famous for its market. A wide variety of leather goods, carpets, gold and alabaster jewelry, Arabian works of art, cotton goods and of course Turkish sweets and dried nuts are the main items to be found there. There are hundreds of small shops for every taste, and every pocket. Always remember to bargain for everything, it is expected. The large Bazaar is also impressive.

In the shops in Kusadasi you can pay for your shopping in Euros as well as in other currencies. Credit cards are also accepted. Most of the shop keepers speak Greek and English so you will not have any problems while shopping.

Do not miss the chance to try traditional, mouthwatering delicacies and taste unique, orient flavors, by visiting a local restaurant.

Finally we depart from Kusadasi at 17:00 and we arrive in Pyhtagorio (Samos) at approximately 18:30.

Prices do not include taxes that you need to pay locally:
11 euro per person regardless of the age.

Turkey boat tour to Kusadasi and Ephesus Having trouble to send your request? Send us an Email 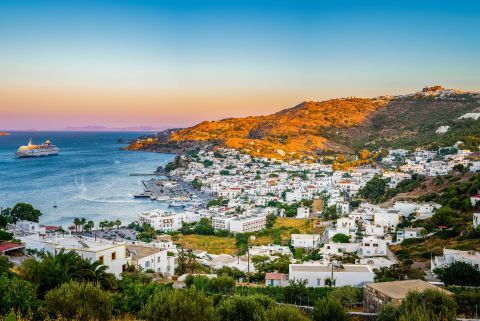 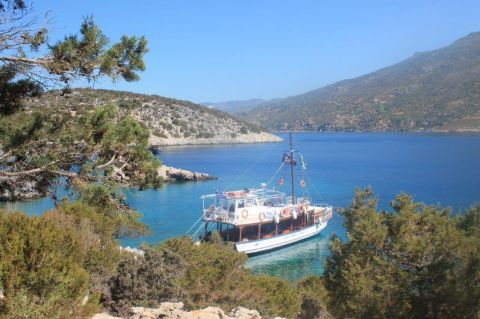 Boat tour to Samiopoula with Bbq
View All Tours