Samos Natural History Museum: The Natural History Museum of the Aegean is located in the town of Mylinoi on the island of Samos. It is 12 kilometers from Samos Town. The building for the museum was built at the expense of Constantine Zimalis and his wife, Maria. They also created a foundation that bears their names. The building does not look like a typical building. It actually looks like a house or a church that had some extensions added to it.

This museum has a rather friendly appeal, for a change. As you enter, there is a huge garden. A statue of Aristarchus, the famous ancient Samian mathematician, is in the center of the garden. This is because Aristarchus was the first Samian philosopher to have studied physical phenomenon at the macro level. He initiated the fact that the Earth revolves around the Sun. Inside the museum, there are five different sections. They are Paleontology, Mineralogy, Geology, Botanology, and Zoology.

In the Paleontology section, one can find the fossils of mammals that have been thoroughly studied by paleontologists since the 19th century. Several international congresses, symposia, universities, and academies have shown interest in these fossils. Numerous ancient Greeks like Heraclides and Aelianos created stories about the fossils of mammals. They explained to them by using the myths about giants.

The European scientific community first heard about the fossil remains from the famous 19th-century paleontologist named F. Major. He came to Samos in 1887 and did several excavations at many different parts of the island. After him, a German from the German consul and an American by the name of P. Brown also did several excavations. Most of the fossils from the first excavations went to the Natural History Museums in Hungary, German, Switzerland, England, France, Austria and the United States.

In 1963, more excavations were carried out by a Greek paleontologist names Professor J. Melentis from the University of Thessaloniki. Many fossils from these excavations became part of the Natural History Museum of the Aegean. Since 1992, the museum and the Prefecture of Samos have sponsored new excavations. One of the animals that can be found in this Paleontology section is the Hipparion, an ancestor of the modern-day horse. It was a horned animal that is represented by a great number of genera and species.

Fossils of several species of carnivorous animals are on display in this section. You can find the ancestors of the elephants and the Dinotheria. Two species of rhinoceros were found in Samos. Orycteropus, an ancestor of the present anteater can also be found in this section. Fossils of ostriches, rodents, and flittermouse are also present.

In the Zoological section, one can find animals from Samos and the rest of Greece displayed in the section. Australian animals are displayed here as they are a donation from the Samian Brotherhood of Sydney. This museum has a zoological laboratory that has a collection of reptiles and amphibians. This lab is open to scientists, students, etc. who want to further their study of reptilian animals. The most famous display in the Zoological section is of the skin of a savage cat that is related to the tiger and is known as a kaplani.

There is a fascinating story attached to the animal. This particular animal swam to Samos from Asia Minor and established itself on the hills around Mavratzaii and became the scourge of the domestic animals and flocks of the district. The Samian farmers and shepherds were tired of this animal killing their flocks and forced it into a cave. They blocked the cave with rocks. They thought it was would die, but it managed to survive by eating old prey and drinking water in the cave.

A brave villager was sent to check to see if it was dead. The savage cat was indeed alive and they engaged in combat. The villager was injured and called for help. No one heard him. The villager's brother came anyway to see what was happening and started to fight the tiger as well. The brother managed to kill the tiger and this particular tiger is now displayed in the museum.

In the Zoological section, you can also find the remains of the short-necked giraffe. This giraffe was 2.5 meters tall and 3 meters long. This giraffe ancestor had big claws to defend itself and two short horns on its head. You can also find a fang of one of the most dangerous animals on the planet, called the Macherodon. Its teeth were knife-sharp.

In this section, an interesting display is that of an insect nest and bones of the insect inside a rock. A display of short horses can also be found in this section. They were so named because of their height, which ranged from 80 cm to 1 meter. They had large heads, exposed narrow jaws, a small brain and three hoofs on each leg.

In the Rocks and Minerals section, you can find 300 rocks and minerals from Samos and the rest of Greece displayed. It also has rocks and minerals from all over the world. The newest section at the museum contains fish and shells. This is why it has only 150 shells from Greece and the world. It has some replicas of fish. Hopefully, in the future, this section will grow.

In the Botanology section, you will find a collection of almost 3000 flora specimens from Samos and the Aegean in the Herbarium form. K. Dim. Christodulakis of Patras University had a hand in creating this section. He still supervises it. You can find about 1250 specimens of uncultivated flora from Samos. Samos has so much flora due to the benefits of where it is located. 305 flora specimens come from the activities of humans and 15% of the flora comes from the dispersion of birds, sea currents and the wind. 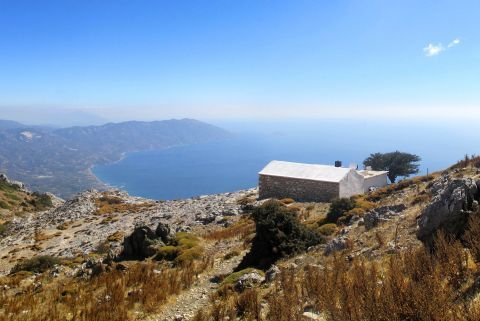 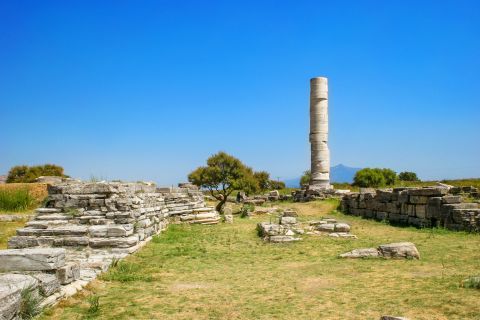