Samos is part of the Eastern Aegean Islands. It is situated near the islands of Ikaria and Chios, very close to the Turkish coast of which it is separated by a strait called the Mykale Strait, only 3 km wide. The island has a total area of about 475 sq km and a coastline of 159 km.

The capital of Samos is the small town of Vathy which is located on the northeastern coast. The population of the island is about 40,000 inhabitants. The island is traversed by small brooks which are springing from the Ambelos mountain chains. Two small artificial lakes formed by springs can be found in the eastern part of the island. The highest peak of Samos (and of the Aegean) is Mount Kerkis or Kerketeus whose highest peaks are Vigla (1450 m) and Zestane (1195 m).

The geography of Samos distinguishes for the lush forests and valleys. Small plains and valleys separate the mountains, covered mostly by olive groves, orange and citrus trees. Bushes, pine forests, plane trees, cypresses, chestnut trees, and more vegetation cover the ground of Samos. Endless vineyards can be seen and in fact, wine is strongly connected to local history. From those are produced the famous and excellent wines of Samos. Numerous bird species live on Mount Kerkis, while in the sea surrounding Samos, there are seagulls and flamingos.

Discover the Map of Samos

View the map of Samos with the main villages, beaches, and sightseeing. Also, the location of the port and the airport.
View: Map of Samos 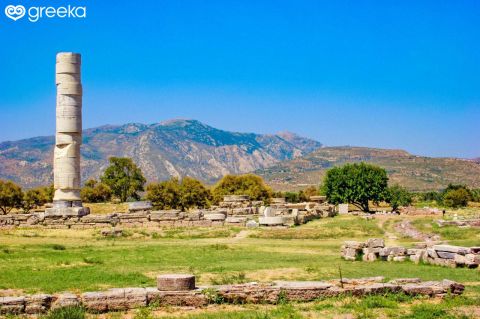