The site of Ancient Lindos in Rhodes: The ancient town of Lindos, 45 km to the south of Rhodes Town, was founded by the Dorians in the 10th century B.C. In the 8th century, it already was a major trading center, due to its geographical position between Greece and the Middle East. However, it started to decline when the city of Rhodes was founded, in the 5th century.

The archaeological remains found inside and around the Acropolis of Lindos reveal the wealth of this ancient town. Part of its worth-visiting monuments is a Doric 4th-century temple devoted to Athena Lindia, where people used to worship their patron goddess with offerings and sacrifices. It was built on the remains of another temple.

The Propylaea (the gateways) of the Sanctuary consists of a staircase and five-door openings. You will have the chance to see the relief of an ancient warship, called trireme, at the foot of the staircase. Apart from these, there is also a Roman temple dedicated to the emperor Diocletian and a Hellenistic wall that surrounds the Acropolis.

All these ancient sites are protected by a Medieval Castle, built in the early 14th century by the Knights of St John. Two towers of the castle are well-preserved till today. Outside the castle, on the southwest side of the will, there used to be an ancient theatre. Today the only remains of it are some rows of seats, part of the auditorium. It is believed that the theatre could host 1,800 spectators.

The excavations at the archaeological site of Lindos started in the early 20th century. The Italians, who occupied Rhodes island from 1912-1945, tried to restore the ancient findings but they actually damaged part of them. The site today belongs to the Greek Ministry of Culture and much work is being done, by both Greek and foreign archaeologists, to protect this monument.

Tours and activities related to Acropolis of Lindos

Photos Of Acropolis of Lindos by Greeka Members

Photos Of Acropolis of Lindos by Greeka Team 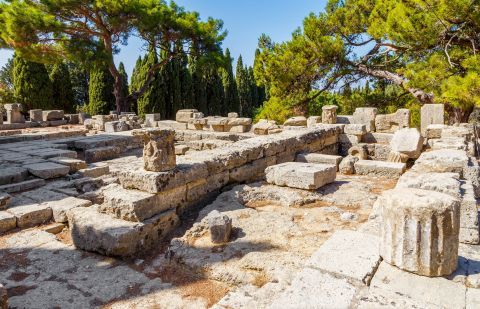