Patmos is the holy island of Revelation and one of the most peaceful destinations in Greece. It is probably the only Greek island where the presence of the Monastery of Saint John, the beautiful monastic complex, has had a major impact on its history and evolution.

The architecture of Patmos is strongly related to the foundation of the Monastery of Saint John, the most unique architectural marvel in Greece. Built in the 11th century, the monastery dedicated to the disciple of Christ, Saint John the Theologian, and has been the center of Greek orthodox religion ever since.

The highlights of Patmos architecture are seen in the beautiful settlement presenting a plethora of whitewashed mansions and Aegean style houses that embrace the fortified monastery in Chora. A house in Patmos is divided into two parts serving the basic needs of the locals with a lovely flourishing garden and storage areas in the basement. The Byzantine structural elements which are often seen in the capital testify the island's historical importance throughout the ages.

Following the economic development of Patmos island, we see the appearance of two-storey luxurious houses and mansions that very much resemble each other. Due to the constant pirates' attacks, the settlement was fortified, not with walls but according to the structural plan of the houses that allowed no openings and no special appearance. Still, the safest place in Patmos was the monastery of Saint John where locals found shelter. Chora is built around the fortified monastery and charms all visitors to this day. 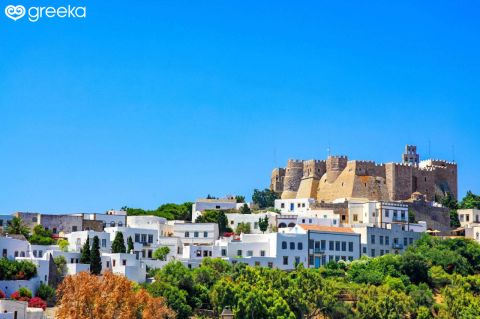