The Castle of the Knights in Kos, Dodecanese: The castle of the Knights of Saint John on Kos, was constructed with local stone and with the remains of previous constructions and buildings. It still shows a number of blazons on the masonry, some columns, bases, and architraves from the ruins of the old city. It was built during the occupation of the Knights, which lasted for over two hundred years.

This piece of architecture and construction engineering amazes visitors by the sight of a stone bridge that used to link that area of Kos, which used to be an island, with the mainland. Today it is called Phoinikon, which means palm trees.

After going over the bridge, visitors see the stone two-precinct castle. Its awesome four interior towers are circular and are located in the four corners. The southeastern precinct, the largest, in fact, includes the tower on the south and still has gun ports, battlements, and bastions on all the corners. There is a drawbridge communicating both precincts over the large moat between them. The construction took several years, and it dates between the years 1380-1514.

The interior precinct seems to be the oldest part, built in the times of the ruthless attacks of Sultan Bayazit. The other precinct, in the exterior area, dates from 1495 and was subsequently built by Grand Master D'Aubusson, Grand Master D'Ambroise, and then finished in 1514 by Del Carreto.

The oldest tower, the one on the left of the drawbridge, still shows the blazons of Grand Master De Milly (1454-1461), and Grand Master De Lastic (1437-1454) Since the construction of the Knight's Castle took about 130 years, the influence of the different architecture styles is apparent, as it is still possible to see a frieze depicting a number of garlands and masks from Hellenistic times contrasting with the oblique basalt columns on the gates, known as Carmadino gate, dating from the Christian times of Limenos Basilica.

The museum of the Castle of the Knights, located in the Northern area between both precincts, still shows several old inscriptions, sculptures, and altars. The museum building itself was restored by the Italians and used to be the knight's warehouse. 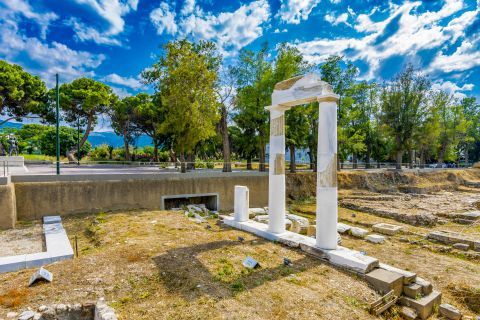