The architecture of Kos has been much influenced by foreign civilizations throughout the ages. The capital, Kos town, is filled with distinctive features from the Ottoman architecture like Muslim mosques and marble fountains, giving much insight on that historical period as well as several Venetian buildings like the Roman house. The most important characteristic of the island's traditional architecture is the whitewashed stone houses with the bright colored shutters and the flat roofs which connect with the narrow cobbled paths similar to the Cycladic layout.

The entire town of Kos is a mixture of historical sites, like the Roman Odeon, the ruined Temple of Dionysus, Ancient Gymnasium and the Venetian Castle of Knights (15th century AD) which constitutes a fine example of the local defensive architecture. A plethora of architectural monuments and beautiful churches embellish the capital and give the island its enduring medieval character.

The villages of Kos island, like Asfendiou, Pyli, and Antimachia, have a special interest, highlighting the local characteristics of Kos Greece as well as the picturesque windmills which create an attractive setting for the visitor. A major part of the island's architecture and unique style is also evident in the several monuments and churches that you will meet in the main town. 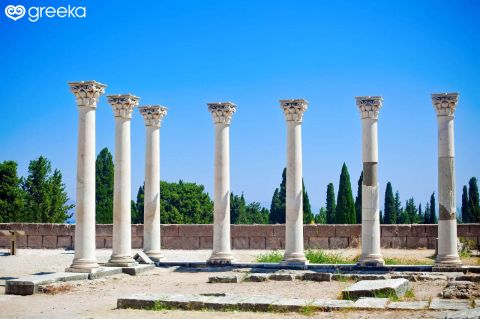