The small island of Alimia close to Halki Dodecanese: Alimia (or Alimnia) is a small island of the Aegean Sea located between Rhodes and Halki. This island with a coastline of 21 km is presently uninhabited since the end of the Second World War. However, it has a long history that started from the antiquity and followed the route of the neighboring island of Rhodes.

In the ancient times, the island was called Evlimnia, a name that is related with the two natural bays on the eastern and the western side, Agios Georgios and Emporio, that provide safe shelters. In the Hellenistic times, Alimia was used as an anchorage and observatory for the Rhodian fleet. A tower was constructed that survives till today on the eastern side of the tallest peak of the island. Part of this Hellenistic tower was used for the construction of a Medieval Castle in 1475 by the Knights of Saint John, who had conquered the Dodecanese that time.

The village of Alimnia is found at the largest bay of the island and has many houses, most of which are ruined after the abandonment of the island from its inhabitants in the 1940s. This village was declared a protected settlement in 1978. On the northwest of the island and in close distance to the coast, there is a small lake with salt water, one of the 37 natural reserves of Dodecanese.

Excursion boats leave regularly the port of Nimporio in Halki and the port of Skala Kamirou in Rhodes to transfer tourists to Alminia, so that they enjoy a trek around the island and a relaxing swim in the crystal beaches. 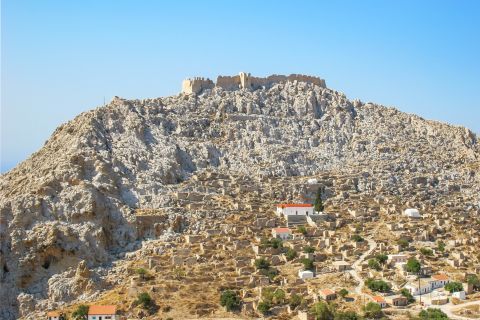