Emporio Santorini: The village of Emporio is the largest settlement of Santorini and is located 12 km from Fira. In contrast to the cosmopolitan settlements like Fira and Oia, which are nestled over the caldera, Emporio lies on the foothills of Mount Prophet Elias.

Emporio is the Greek word for commerce, indicating the importance of the village for the island’s economy during old times since it used to be the hub of commercial affairs. The settlement radiates a medieval aura due to its well-preserved characteristic architecture. The village reminds a fortress as it was built to protect inhabitants from marauding pirates. All buildings were purposely constructed cheek to cheek so locals could defend their houses more effectively. When piracy no longer constituted a threat, the village expanded and adopted the layout that it presents nowadays. In the heart of Emporio lies Kasteli, a one-of-a-kind castle town. Its walls were made from grouting that featured volcanic substances. The alleys are narrow; the same applies to the windows and doors of the buildings. In other words, Kasteli could be described as a joined-up fortification settlement. The area is still inhabited, with locals trying to preserve it in the best condition possible. 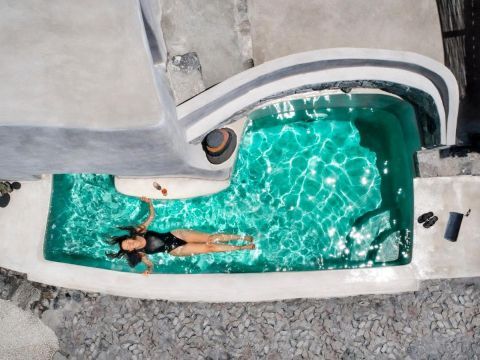 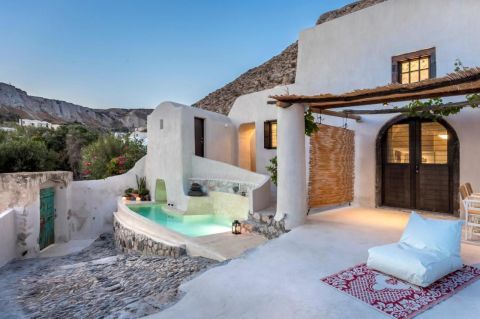 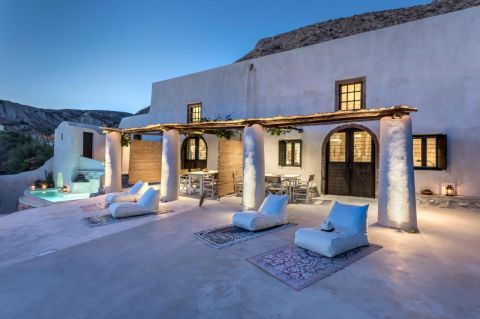 For a luxurious, yet authentic Cycladic experience, book your stay in the partly-stone-built Canava Villas, an impressive cave-house in Emporio. The villa has a large housing capacity and is fully equipped, with outdoor and indoor hot tubs and stunning traditional architecture. 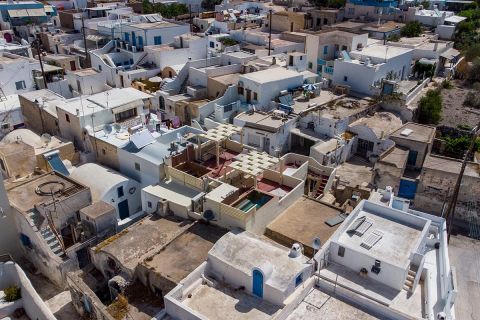 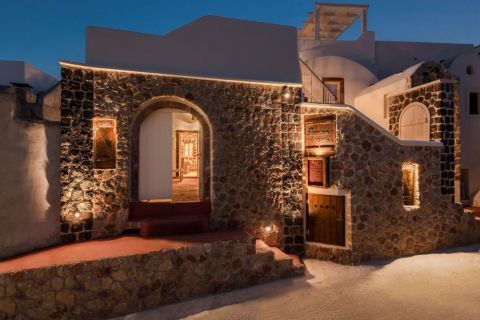 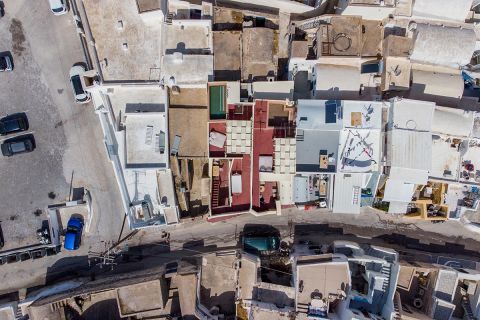 With impressive stone-built walls and cave-like bedrooms, Hariton Villas is located in an authentic Cycladic environment, with traditional furniture and decor that will take you back to the past. The complex consists of 2 old houses that have been carefully restored to preserve their original style, ... 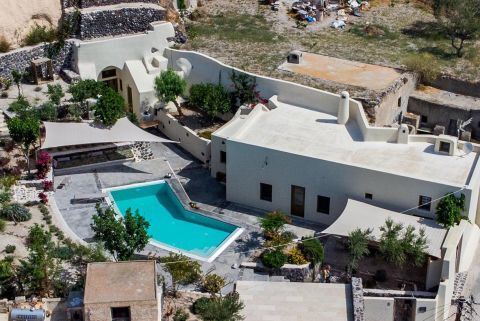 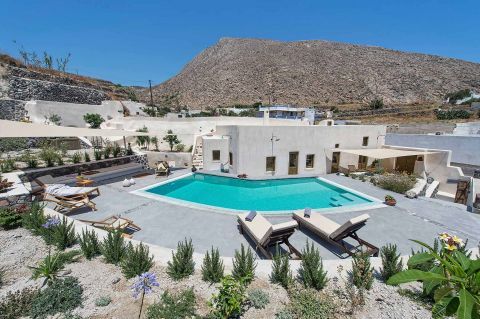 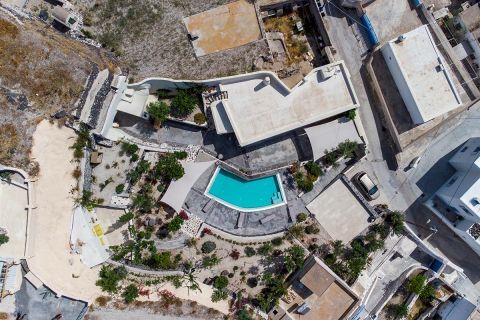 In the picturesque area of Emporio village, Mantilida Villa is a traditionally designed sanctuary for a relaxing vacation with sea and castle views. The newly renovated villa comes with cozy cave-like rooms, similarly to the old houses. You will find both modern furniture and antiques as well as a ...

On the northern part of Emporio lies Goulas tower, which was built during Venetian occupation (probably around the 15th century). The tower is huge and square-shaped, with numerous floors on the inside. Entering and exploring it allows marvelous views of the regional setting. Other villages of Santorini, such as Akrotiri and Oia, also boast such towers.
Gavrilos hill is facing Goulas tower. Eight 19th-century windmills of six meters lie atop the hill in a ridge line. They are in different states of repair; some serve as houses while others remain derelict.
Fun fact: Goulas is the Turkish word for the tower!

Emporio is also home to some of the most enchanting churches of Santorini. The Marble Church of Saint Nicholas, the Church of Prophet Elias Hamilos, and the Church of the Transfiguration of Christ are among the most popular.

In terms of accommodation, the area hosts limited yet lovely lodgings, mainly including villas and rooms. However, accommodation options are available in the adjacent region of Perissa, which is way more cosmopolitan than the traditional and low-profiled Emporio.
The infamous black-sand Perissa and Perivolos organized beaches lie in proximity to the village. In particular, they both lie just 10 minutes away by car.

How to get to Emporio

How to get to Emporio

Private transfers: We recommend using an online pre-booked transfer service, which provides transfer by taxi, minibus, or private VIP car and arranging a pickup directly from the port, airport, or your hotel. Alternatively, there’s the option of scheduling a direct pickup by a local driver at the following numbers: 0030 690 679 4316, 0030 22860 22555.

Car rental: There’s the option of renting a car and picking it up directly from the airport, port, or your hotel. Using a car allows visitors to discover Emporio and many other places of interest at their own pace. 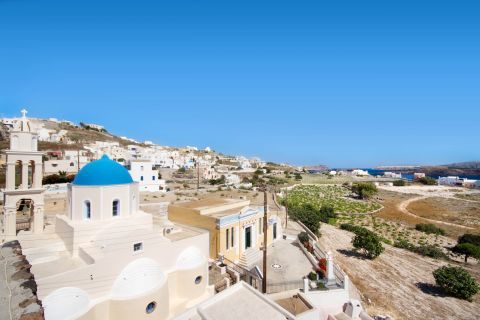 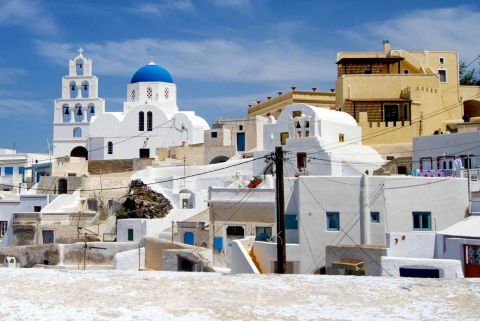 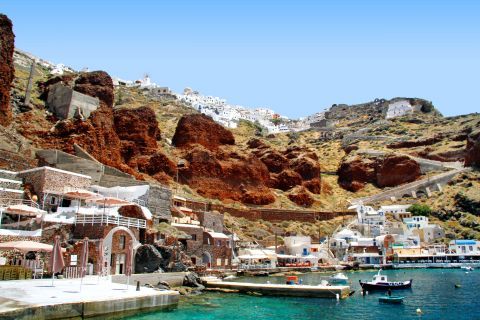 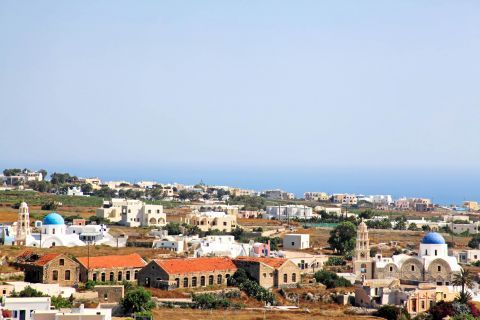 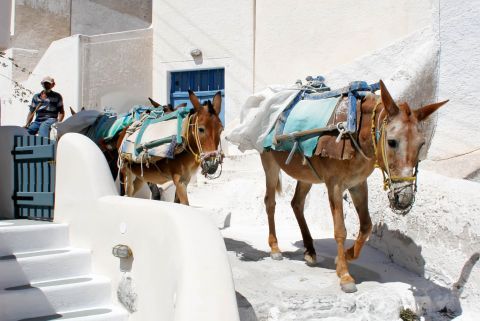 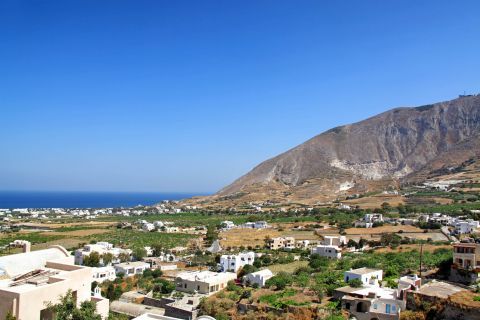