The architecture of Naxos is highly appreciated for its Venetians style. In contrast to the rest of the Greek islands, Naxos has one of the best-preserved medieval towns in Cyclades, Kastro, renowned for its defensive character and noble atmosphere. At first sight, anyone can notice that the island's sights are strongly influenced by the Venetian culture that was enforced for many years and by other civilizations who occupied the island throughout the centuries. The abundance of architectural monuments and the picturesque features compose the magical scene of Chora of Naxos along with the Frankish towers and the whitewashed two-storey houses built one next to the other.

A walk around the capital is a chance to admire the rich architectural styles of the island including the mansions, the traditional houses, and the Venetian towers. The mansions of Naxos are one of the oldest residencies which belonged to the noble families and characterized for their large rooms, high ceilings, and luxurious decoration. Some of the mansions built outside the castle walls were built by wealthy Greeks while others have a strong fortress character. The traditional houses though is the most widespread architectural style in Naxos Greece, considering the needs for simplicity. Such houses can also be found in the countryside of Naxos island, small farmhouses built of stone.

However, Naxos is one of the islands that brought to light a plethora of Venetian towers from the medieval times that still stand in the surrounding regions. Most of Naxos Towers were founded in the 17th century and only 30 of them survive to this day. Today, the only characteristic example is the Venetian Castle of Marco Sanudo and stands at the highest spot of the hill, looking at the Aegean. Below the castle, there are the beautiful white houses in Cycladic style, the narrow alleys, romantic archways, and the beautiful churches. Naxos is also linked to the history of Byzantine art, being home to many churches and monasteries. Another village worth-seen for its Venetian influences is Apiranthos. 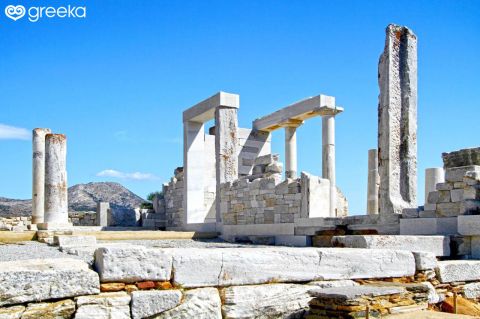