Restaurants in Kea invest a lot in fresh and high-quality raw materials. Even though the island doesn’t provide fine-dining experiences to the extent other Cycladic islands like Santorini or Mykonos do, meals are confected from the finest commodities.
Local produce, meat, fish, and seafood turn into palatable dishes for guests to enjoy.

We have hand-picked the best 9 restaurants in Kea and marked our favorite ones with a ❤.

Most eating establishments in Kea lie in Korissia, Vourkari, and Ioulida and serve Cycladic and Mediterranean cuisine.
Vourkari is a fishing village and provides travelers with plenty of options regarding dining. It is well-known for its fish and seafood dishes served in restaurants along the promenade.
Korissia is a seafront area, too, but also boasts taverns known for the delicious meat-based plates.
In Ioulida lie both traditional and more modern restaurants, many offering exceptional views of the Aegean and the mainland.
Taverns are strewn across the island, so you can enjoy a meal in other regions, like Koundouros or Otzias.

• Where to eat the best fresh fish and seafood in Kea?

• Where to eat the best meat on the island?

• Where to enjoy a romantic dinner?

• Where to eat gourmet?

• Where to eat modern Greek cuisine?

• Where to eat vegan and vegetarian?

Being on a Cycladic island, restaurants in areas near the sea serve fresh fish and seafood that many times constitute the fisherman's catch of the day.
Some of the most flavorful dishes include kalamari gemisto (stuffed squid), atherina (a tiny type of fish), and garidomakaronada (shrimp pasta).

In Kea, one can taste dense-flavored meat, too.
Some restaurant owners breed their own animals to assure that their clients are provided with the best meat quality.
Gourounopoulo (pork), paidakia (lamb chops), and steaks are some of the most popular dishes, but you may also come across the traditional kokoretsi (grilled intestines from lamb or goat wrapped around offal) and kontosouvli (grilled pieces of pork cut from bone) on a taverna’s menu.

Loza (the local prosciutto) is a local pork meze of the island, while Ksinotiri and Kopanisti constitute tasty local types of cheese that are usually served as accompaniments.

Paspalas (pork cooked with eggs and tomatoes) and Tsigaropita (a pie made with pork fat) comprise traditional dishes of the island. We recommend capitalizing on the opportunity to taste them if they are available at the restaurant!

The dishes served in Kea's restaurants owe their tastiness to the high quality of the materials that create them. Virgin produce, freshly caught fish and seafood (including lobsters, octopus, and squids), and locally bred animals are the protagonists of the plates offered in Kea.
Meat and fish taverns constitute the main categories of eating establishments; however, restaurants that serve Mediterranean cuisine with a twist also lie on the island.
In terms of scenery, seafront establishments offer wonderful views of the cerulean Aegean waters, while many restaurants and tavernas in Ioulida allow you to gaze at the mainland, too.
Korissia, Vourkari, and Ioulida boast the most options regarding dining. Nonetheless, additional regions including Otzias and Koundouros, are home to limited yet decent restaurants.

Tipping in Greece does not work by percentage. An average tip depending on how satisfied you are with the service is around 2-5 euros.
Not leaving a tip at all is considered impolite.

Most restaurants and tavernas have a menu in English, and the majority of the staff can communicate via the language. 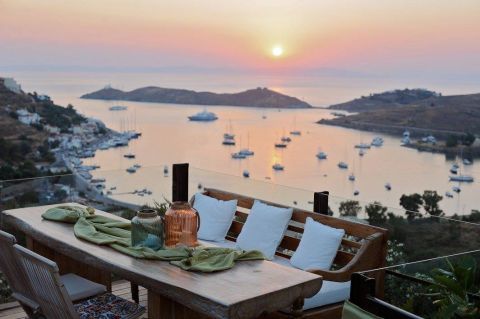 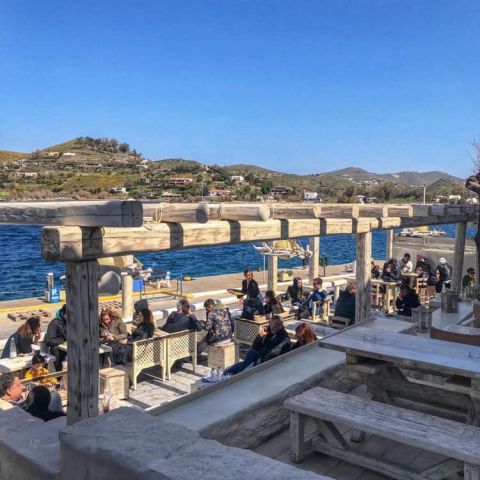