The Cave of Saint John (Agios Ioannis) is located at the southwestern part of Irakia and it is one of the most impressive places of interest on the island.
It was discovered in 518 CE, when a church was constructed there. The Emperor Justinian I who ordered the construction of the church dedicated it to Saint John to honor him, turning the cave into the island's second most popular religious pilgrim after the nearby Cave of Apocalypse.

Two caves are in fact located there; the second one is much smaller and it is said to have been the house of the mythological one-eye giant Polyphemus.

Others claim that according to tradition, a shepherd entered the cave in the 19th century during a storm and when he left, he discovered a print of the figure of Saint John on his clothes.
For this reason, the cave is considered a sacred place of worship and every year on August 28, worshippers gather to light candles.

The cave is full of stalactites and stalagmites and faintly visible remnants of Byzantine frescoes have been found.

It can be reached on foot and it is a popular hiking destination, although the path to get there is difficult.
Entering the cave can also be quite challenging, since its entrance is steep and the interior is rocky, with a low ceiling.
It has not been illuminated so it is necessary to bring your own flashlight. Good shoes are also a must. 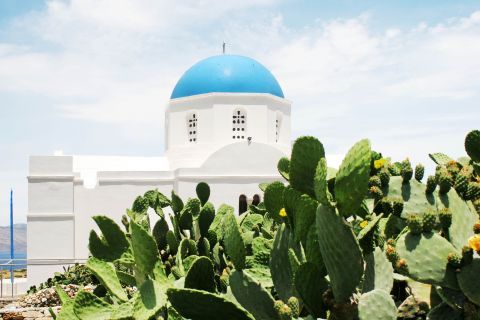